As we enter the start of driving season for the Atlantic Basin, we have already seen refined product cracks rise to historical highs in both the US and Asia markets which have boosted global seaborne gasoline loadings to a 24-month record for March. Looking forward, high crude runs in a few selected regions could be the factor to cool gasoline cracks and refining margins somewhat.

As we enter the start of driving season for the Atlantic Basin, we have already seen refined product cracks rise to historical highs in both the US and Asia markets. Gasoline cracks have taken a more gradual trajectory to multi-year highs which has resulted in global seaborne gasoline loadings hitting a 24-month record for March. The strong US cracks incentivised strong European exports to both the US and to West Africa.

As we move away from spring turnaround season for the US and Middle East, and enter peak period for Europe and Asia, and amid rising chances of lower Russian product supplies, we are likely to see continued supply limitations across the barrel. Also this year, we have to consider extremely volatile crude prices and high hydrogen costs, challenging refiners continuously which could translate into reduced runs. The emergence from covid restrictions in much of the US and Europe combined with the desperate search for Russian diesel replacements could cause refinery yield shifts towards high-margin products like diesel and jet fuel, further capping gasoline supplies. 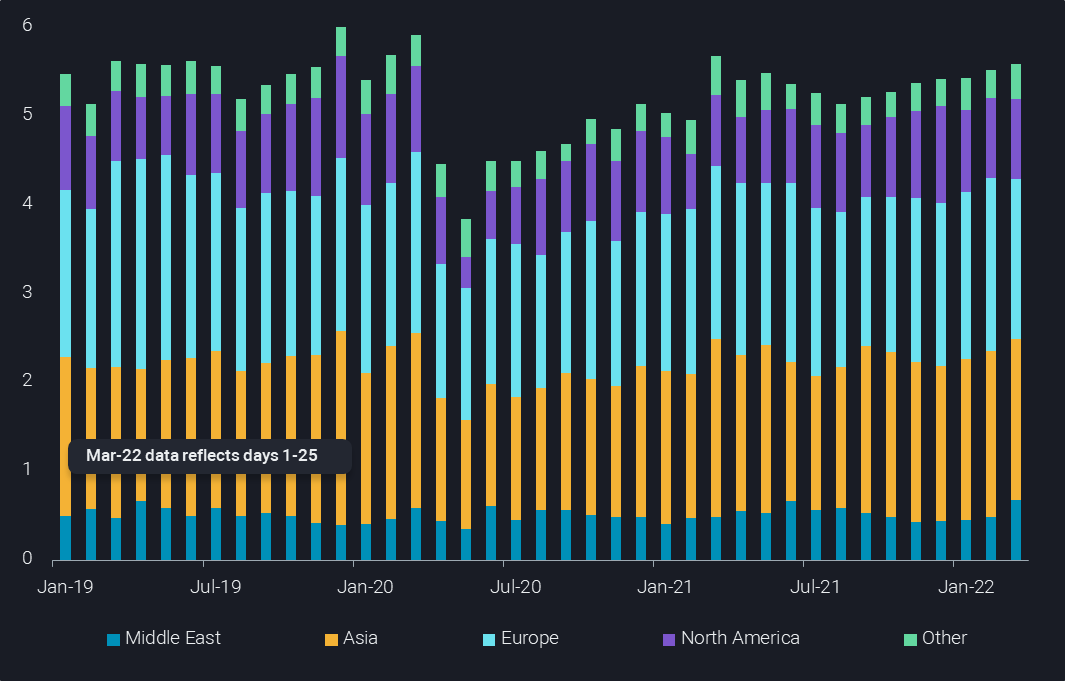 Major supply regions have their own unique challenges

Although US PADD 3 refineries are recovering from a heavy turnaround season and reaching upwards of 94% utilization, the question of how to replace 200-300kbd of Russian fuel oil and feedstocks that has now been banned still exists. While importing heavier crudes is on the agenda, these flows have yet to compensate. So far gasoline exports from PADD 3 have been stable in March at 700kbd, 20% higher than March 2019 exports.

European refineries’ gasoline output has hit a two-year high in February as a result of a 10% y-o-y increase in crude intake pushing gasoline production to a 25% increase over last year while European gasoline stocks in February are 12% lower than February 2021(Euroilstock). This said, ARA has reportedly been building gasoline stocks in March due to the subdued loadings towards the US, despite high flows to West Africa (partially as replacement cargoes) (Argus). In addition, Russia naphtha imports continue to rise into ARA, the major blending hub in Europe for gasoline before getting re-exported elsewhere, mainly to West Africa and PADD 1. Since Europe depends largely on naphtha imports from Russia for gasoline blending, any reduction in flows from Russia may impact these stock levels going forward.

A strong recovery in the Middle East will also help to cool gasoline prices as refineries return from peak turnaround and maintenance season. In March almost 1mbd gasoline loadings can be seen from the Middle East, staying mostly East of Suez.

PADD 1, which accounts for around 40% of US gasoline consumption, has seen stocks fall well below the five year average, causing Nymex RBOB to price in the highest backwardation since August 2021(Argus). However, US gasoline demand remains 5% below the seasonal 2019 level (EIA). Several states are offering incentives to alleviate the high retail costs which may well increase demand in the near term. However, so far the pricing and demand incentives have done little to increase the seaborne loadings headed towards the region which are down by about 30% versus a three year seasonal average.

South American demand is already high, as indicated by March imports having increased by 9% compared to 2019 and expected to surge during the April Easter holidays, especially after years of mobility restrictions due to Covid.

Gasoline arrivals into West Africa have also been on the rise, reaching a multiyear high of 600kbd for March with over 85% of these barrels originating in Europe. A portion of these flows could be replacement barrels for the cargoes returned to Europe from West Africa in February. 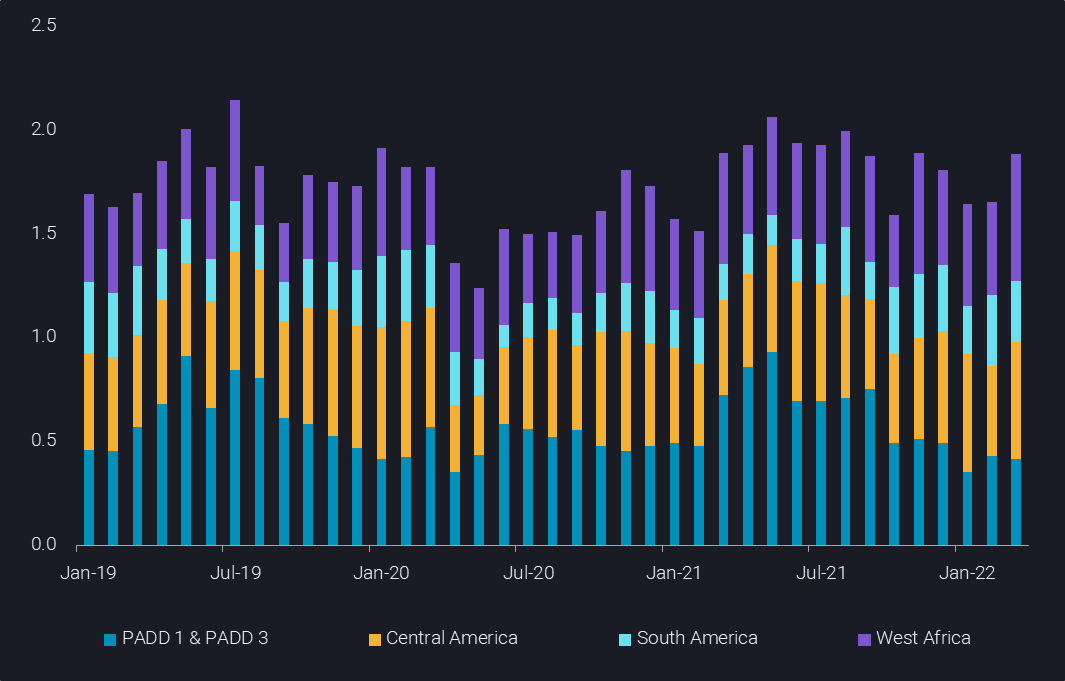 Looking forward, given that the recent high loadings were likely produced with crude purchased before the Russian invasion which caused extreme crude price volatility, we could see some refineries reduce rates, limiting supplies at a time when gasoline stocks are already low and demand increases for the driving season (April – August). European and some Asian refiners are likely to fall into that bracket.

At the same time, those countries which produce crude domestically and can refine it from the source instead of paying costly transport premiums are winning in this environment laden with uncertainty and will continue to produce at high rates to capitalize on their advantages. High American (US, Canada, Brazil, Mexico amid others) and Middle Eastern crude runs over the coming months could be the factor to cool gasoline cracks and refining margins somewhat.