As European gasoline and blending component imports dominate seaborne flows into PADD 1, we take a look at if this could be the beginning of a long term structural change. We also explore other points of gasoline resupply into PADD 1.

As US gasoline demand continues to shine, we take a look at European seaborne gasoline supplies to PADD 1. In particular we want to explore whether the recent spike in transatlantic deliveries may be here to stay.

A look at growing flows from major European blending hubs ARA and Med suggests that seaborne flows of finished grade gasoline into PADD 1 are more than just a temporary answer to the region’s supply problems. 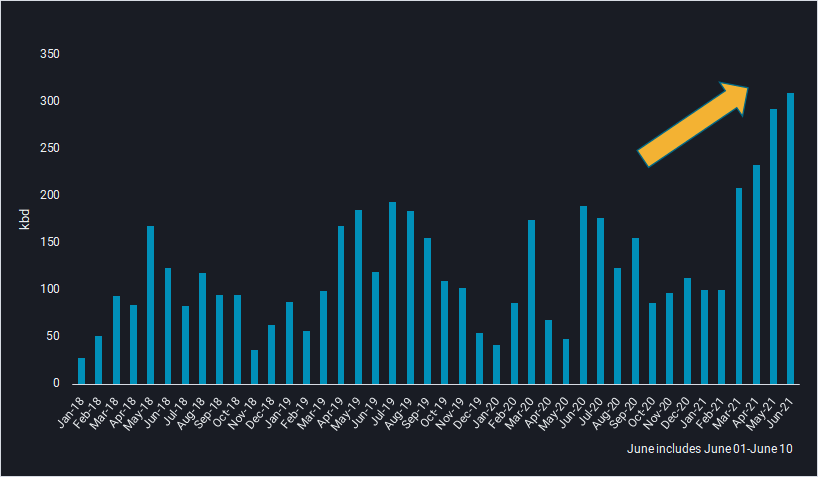 Even before the Colonial Pipeline outage became public, departures of European gasoline cargoes to PADD 1 had averaged 427,000 b/d in the five weeks to May 07 (see data in platform). In the five weeks since then, the figure actually came in marginally lower. Higher import needs are likely due to the combination of rising demand in an area which lost 27% of its refinery capacity in recent years.

A look at competing suppliers to PADD 1

East Coast Canada exports to PADD 1 from January to May 2021 have increased around 14% when compared against 2019. This is despite the closure of the Come by Chance refinery which on average exported close to 30,000 b/d to PADD 1. At any rate, there should not be much room for higher supplies going forward.  See data in platform 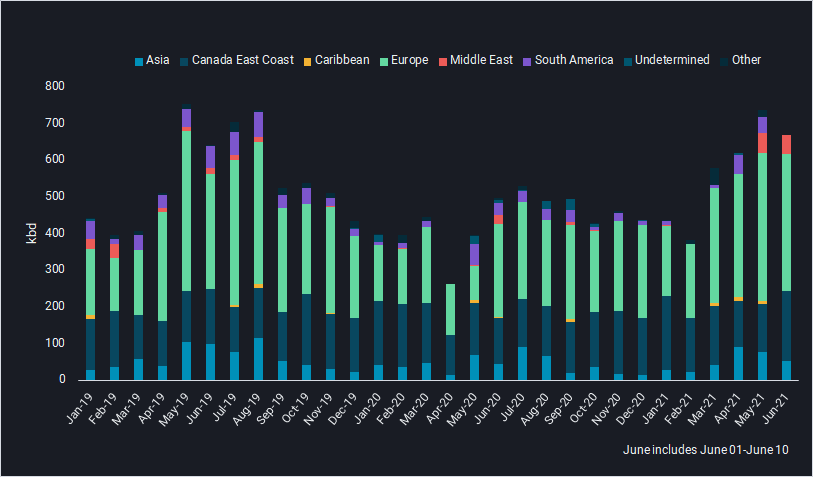 Caribbean supplies play only a very marginal role for the US Northeast and this is unlikely to change going forward. The Limetree Bay refinery, for instance, is subject to Jones Act limitations when targeting US shores, making other regional destinations more attractive.  See data in platform

India exports to PADD 1 of primarily blending components have decreased by close to 14% January – May 2021 versus the same period in 2019.  A larger portion of blending components are staying in the Asia region instead of heading to the US.  See data in platform

Imports from the Middle East have doubled into the region compared to 2019, although volumes remain relatively low (30,000 b/d from Jan-May 2021).  See data in platform

This leaves only the by far biggest supplier of the US Northeast – PADD 3 as the US’s core refining hub. If line space rates are positive then there is a market incentive for PADD 3 to push more gasoline to PADD 1 via pipeline, which will arrive quicker and less expensive than any seaborne flows. Currently PADD 3 seaborne flows of gasoline/blending components head predominantly towards Florida at a rate around 250,000 b/d, with Jones Act rules limiting flows further towards the Northeast.  See data in platform

At the end of the day Atlantic Basin demand will most likely continue to be met by Atlantic Basin supply, whether that is from PADD 3 pipeline, European seaborne barrels or Canadian and some other suppliers. But with some strong demand years left (post Corona and pre widespread electric mobility), quite limited local supplies as well as pipeline space, European supplies are set to hit PADD 1 at higher rates not only than 2020, but also the years before.