Geopolitical tensions between Russia and the West are mounting and the word “sanctions” is being touted with rising frequency. But by analysing flows it’s clear that any material sanctions on Russian oil and gas exports are unlikely to materialise. If this were to happen, Europe would have much more to lose than Russia. In this insight we’ll explore why.

Geopolitical tensions around the Ukraine conflict between Russia and a not truly consistent US/European conglomerate are straining and the word “sanctions” is being touted with rising frequency. But by analysing flows it’s clear that any material sanctions on Russian oil and gas exports are unlikely to materialise. If this were to happen, Europe would have much more to lose than Russia. In this insight we’ll explore why.

Before we explore the potential of sanctions, let’s take a step back and assess how dependent Russia really is on Europe as an outlet for its oil and gas exports. Some may think it is close to 100%, but that was only the case a long time ago.

For crude oil, less than half of Russian exports have been directed towards Europe since 2020. Last year, Russia sent only around 2.4mbd of its own crude directly to Europe, making use of its Baltic Sea, Black Sea and Druzhba pipeline outlets. At the same time, 2.6mbd or 52% of Russian crude exports flowed to the east and the north, with pipeline exports to Kozmino and China being complemented by Far East (Sakhalin) and Arctic supplies (Murmansk). This marks a sharp change from 2010 when 3.5mbd flowed to Europe and only 0.9mbd or 21% headed east and north (calculations based on Argus Media data).

As a crucial detail, nearly all crude production from Kazakhstan is moving to the west, either blended into the NWE or Mediterranean Urals stream, or via the CPC pipeline ending in Novorossiysk. This frees up Russian volumes for the east, including some 240kbd of Russian crude moving to China via a pipeline through Kazakhstan. This means that by extension, any sanctions on Russia may well also put Kazakh exports at risk.

In a similar vein, gas exports are also flowing increasingly eastwards. Based on Vortexa LNG data and Argus Media data for pipeline sales, Russia is currently supplying 25% of its exports to the North/Arctic and the East/Asia, sharply up from a share of just 9% four years ago. The rising share is due to the combination of Siberian pipeline flows to China, and growing LNG exports. 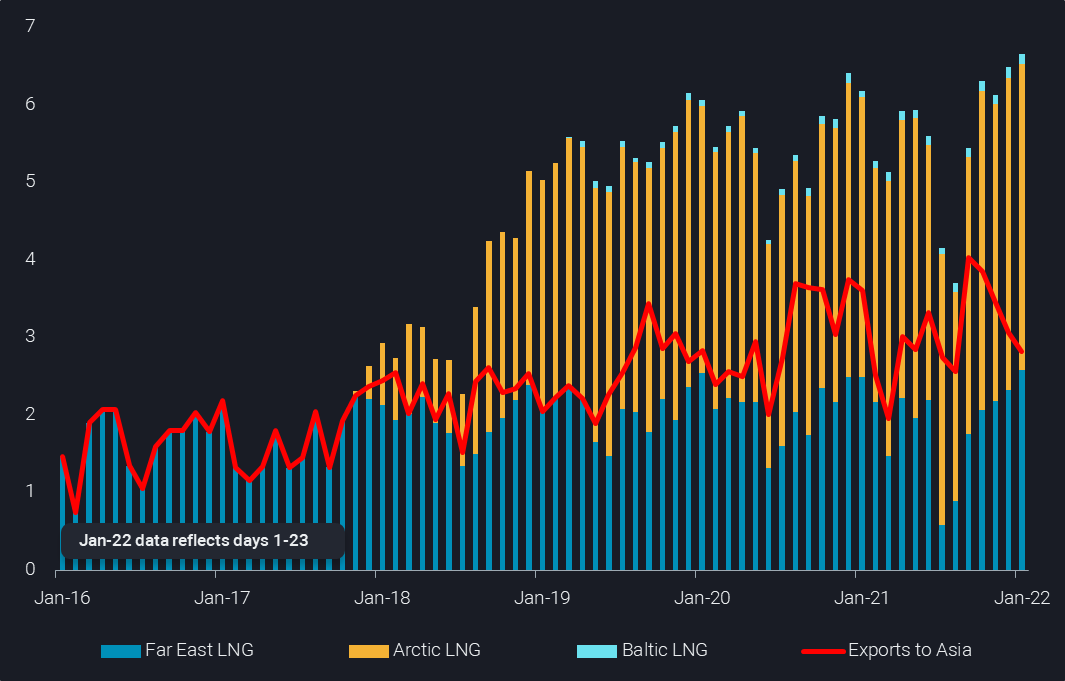 Differentiating between different types of sanctions

There are a wide range of potential sanctions at hand, with various already being implemented against Russia at this point of time. But it is important to differentiate between options, depending on whether they leave energy flows largely unscathed, reshuffled or halted. 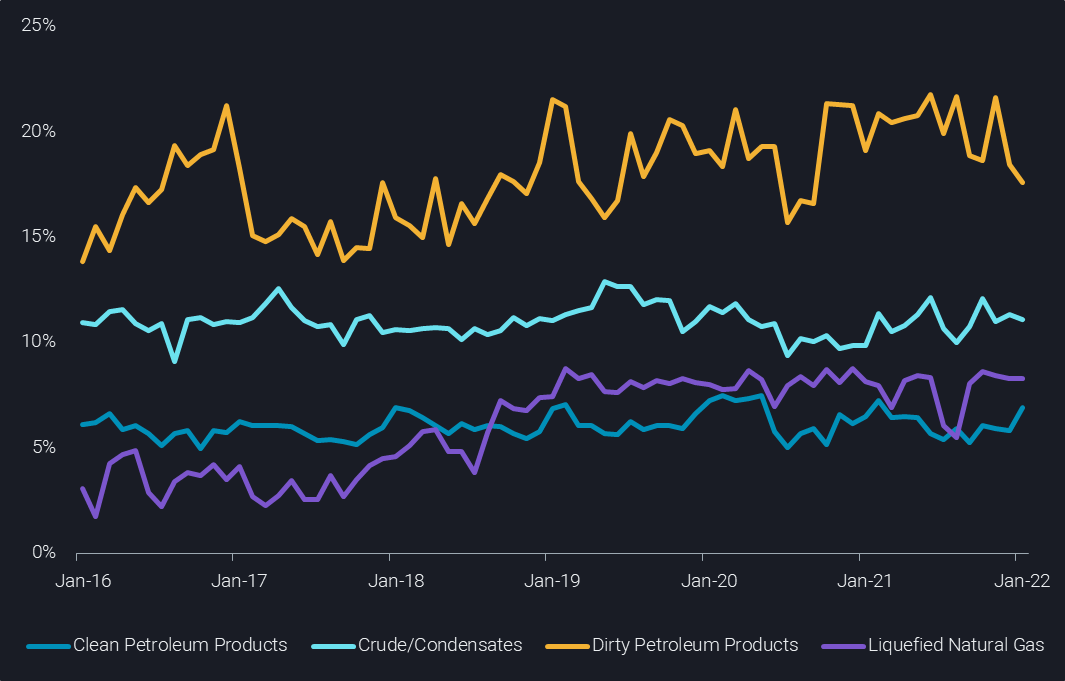 Our flows data shows that Europe has not reduced its dependence on Russian crude oil in recent years. Vortexa data highlights that around 34% of seaborne European crude imports were of Russian origin in 2021, a figure which has barely changed since 2018. Refiners in Italy, Netherlands, Spain and France are most at risk from reduced Russian supplies.

Under this backdrop, it’s clear Europe would struggle much more in substituting the volume and type of crude lost from Russian supplies, than Russia would in finding alternative buyers or in trimming its exports.

In an extreme scenario, Europe would need to find a workaround to losing around 2.4mbd (average 2021 level) of Russian sour crude (not including Kazakh crude). This looks like an impossible task, given the current environment of globally low crude inventories, and waning confidence in OPEC Middle East (largely sour crude) producers’ ability to continue raising production.

This lack of Russian crude for Europe would only be compounded by shortages of Russian diesel. Europe is by far the largest importer of Russian diesel. In 2021 the continent received more than 85% of Russia’s total seaborne exports. In the absence of this supply, Europe would need to plug a gap of around 780kbd of diesel. This is actually slightly above the pre-covid (2019) combined diesel flows from North America, the Middle East and Asia – the only other regional suppliers Europe could lean on at the margin. 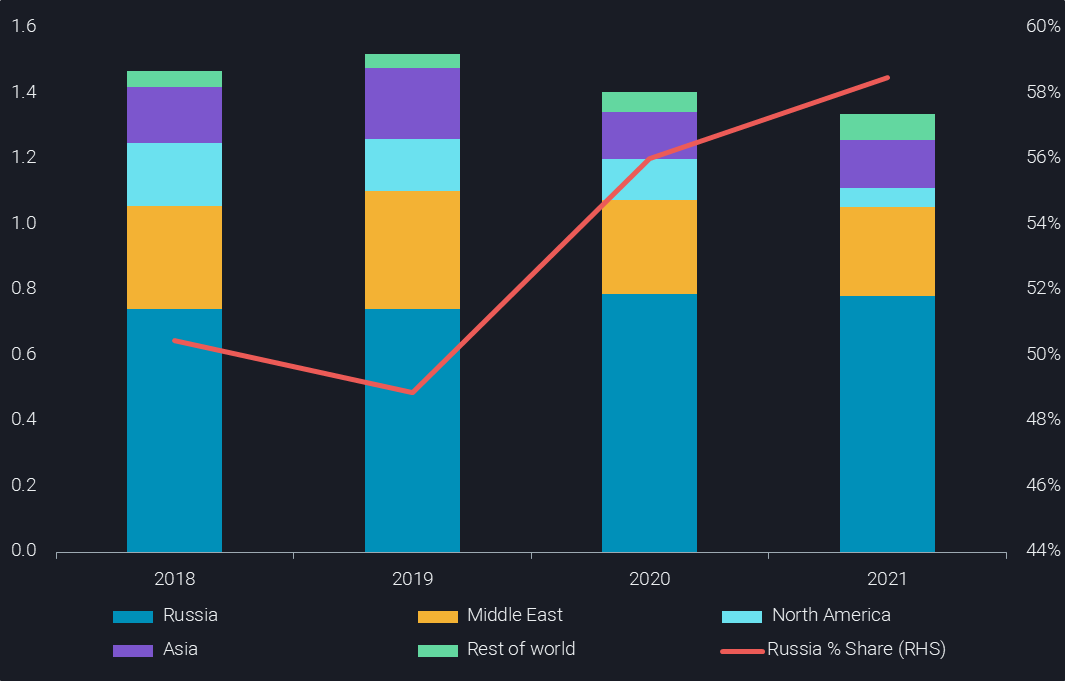 Given just how huge the ramifications would be for Europe, as well as how toothless flow sanctions would be without blocking Russian exports, which in turn would put the entire world into a different place, we deem it most likely that current tensions will be solved diplomatically.

Any sanctions are likely to be much more symbolic in nature rather than material in impact – e.g. sanctions applied specifically to Putin. In the meantime both sides are bargaining hard, to secure a stronger position than they are in now. Russia may want to reach, amid others, three targets.

Whether or not Russia has a real and strong enough interest to invade Ukraine will be seen, given that it already controls the eastern part of the country and the Crimea. The US and most of Europe will seek the opposite in a bid to keep Ukraine flows in the picture. At this stage, the question is more about where both sides of the table will compromise, rather than if a compromise is possible.

Ultimately, Europe simply cannot cope without Russian gas and oil for more than maybe a couple of months. On the other hand, Russia did successfully diversify its crude and gas outlets, but still relies for a huge majority of its export earnings (when including products), on its European partners. The longer the current situation persists, the more it hurts Russia’s ability to benefit from its natural resources wealth in the long term.