Russia – a review of flows, freight and AIS signals
Share

Russian overall oil exports are on a declined path, while crude exports are stable. European resupply needs and volatility/risk are supporting freight rates, while so far we do not see unusual dark shipping activity.

Russian Baltic/Black Sea overall oil exports are on a declined path, led by residual products, while some crude is rerouted to Asia. Stable crude exports amid longer voyages, European resupply needs and volatility/risk are supporting freight rates, while so far we do not see unusual dark shipping activity.

The Russian invasion in Ukraine is ongoing, while a whole month and more of this new reality is now past us. We will review how this month has shaped flows out of Russian regions and how relevant freight rates have developed since then. Finally we will delve into the behaviour of tankers affiliated with Russian cargoes or Russian ownership.

Russian oil exports from the Baltic and the Black Sea are clearly on a declining trend, when looking at a four-week moving average. The latest 4-week average amounts to 3.9mbd, down from an unusually high 4.8mbd in the previous 4 weeks.

We also see Russian oil exports to Europe showing a clear decline. Crude flows to Europe have been disrupted the most on a volumetric basis, but when viewed proportionally, dirty products (like fuel oil and VGO) to Europe have fallen more than 30%. Russian diesel flows to Europe have barely changed m-o-m, underlining the importance and the lack of readily available supplies of the road fuel.

Focusing on crude, while total Russian exports have held stable, flows to Europe have fallen by around 300kbd m-o-m in March. Russian crude from the Baltic and Black Sea that did not go to Europe in March, has instead taken the longer journey to Asia. Urals cargoes have been observed loading via STS on VLCCs off Skaw and Algeciras, likely for Chinese buyers, while Suezmax tankers loading from the Black Sea are with increasing frequency headed towards India.

Russian DPP flows out of the Baltic and the Black Sea show the biggest decline, down by 400kbd to 630kbd on a four-week average basis from the previous four weeks, as displayed in the chart below. The outlook for Russian DPP exports looks especially bleak given the looming US ban on Russian oil, as the US is a key consumer of secondary feedstocks from Russian refineries. It is likely that other buyers who still have the option to buy some barrels, albeit in a challenging environment, will focus their attention on the more essential crude and diesel cargoes. And the reports of run cuts and suspensions at Russian refineries is likely to cap fuel oil and VGO exports as well from the supply side. 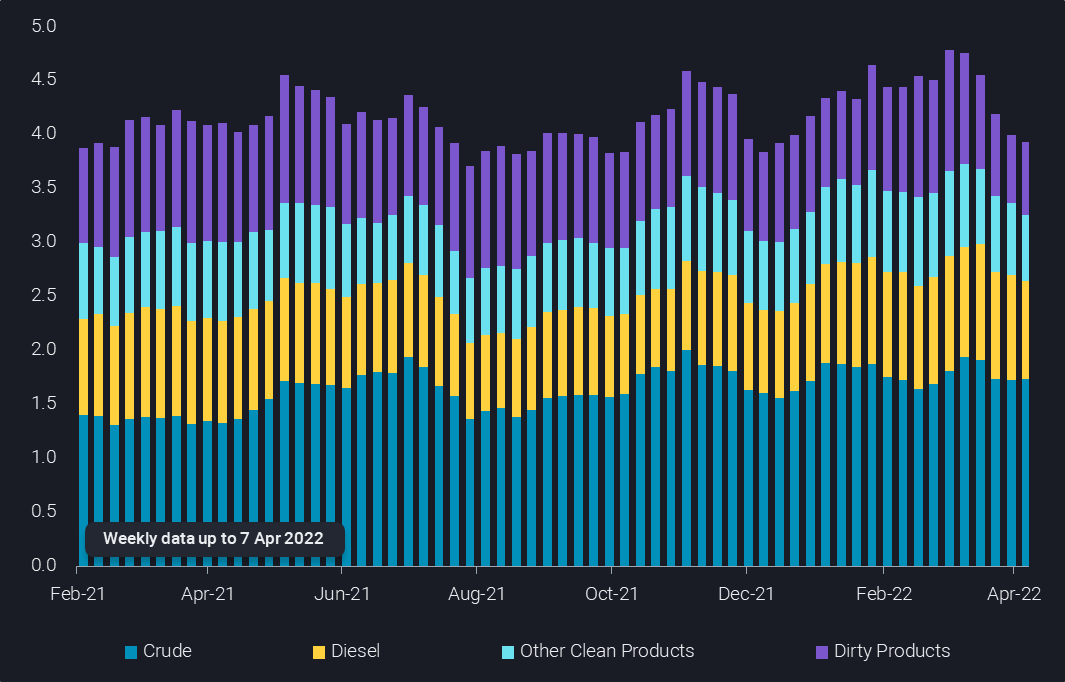 Black Sea and Baltic freight rates edging up together but for how long?

Freight rates from the key Baltic and Black Sea regions have experienced a volatile period throughout March. Following the initial freight rate spike reflecting the uncertainty of sanctions and the massive war-risk premiums, the market normalised and owners looked to compromise at lower levels.

Yet both, TD6 (Black Sea-to-Mediterranean) and TD17 (Baltic-to-UKC), rates are on a mini-rally over the last few days. Tonne-miles out of the Black Sea look relatively stable, while Aframax tonne-miles ex-Baltic have climbed significantly since late March, with vessels heading towards the Mediterranean and India at the expense of Northwestern Europe. This new recovery seems to be driven by limited vessel supply rather than demand.

Vessel availability in the Black Sea remains low due to the increase of demand out of other regions which have absorbed Suezmax tonnage. These regions are mainly West Africa (as reflected from the booming West Africa-to-UKC TD20 rates)  as well as the US Gulf coast. Europe is increasingly reliant on both regions for crude imports in order to replace Russian barrels.  While the same dynamics affect rates in the Baltic Sea, the CPC production issues also contribute. Loadings out of the CPC terminal are occurring at lower rates with an increasing number of vessels experiencing delays, some even moving their laycan dates up to 2 weeks later. These delays are subsequently having a knock-on effect on the availability levels in the Baltic which is continuously decreasing.

When the flow rate in the CPC terminal normalises, this operational bottleneck that has been created in the Black Sea will cease to exist. This in turn means that Suezmax and Aframax availability will likely pick up in the rest of Europe, which could in turn lead to a downward trajectory for the Baltic TD17 rates. However at the same time the additional CPC cargoes coming to the market after April, will further increase global Suezmax demand. This could consequently strengthen rates out of the Black Sea, especially if India continues to buy Russian barrels from the region. 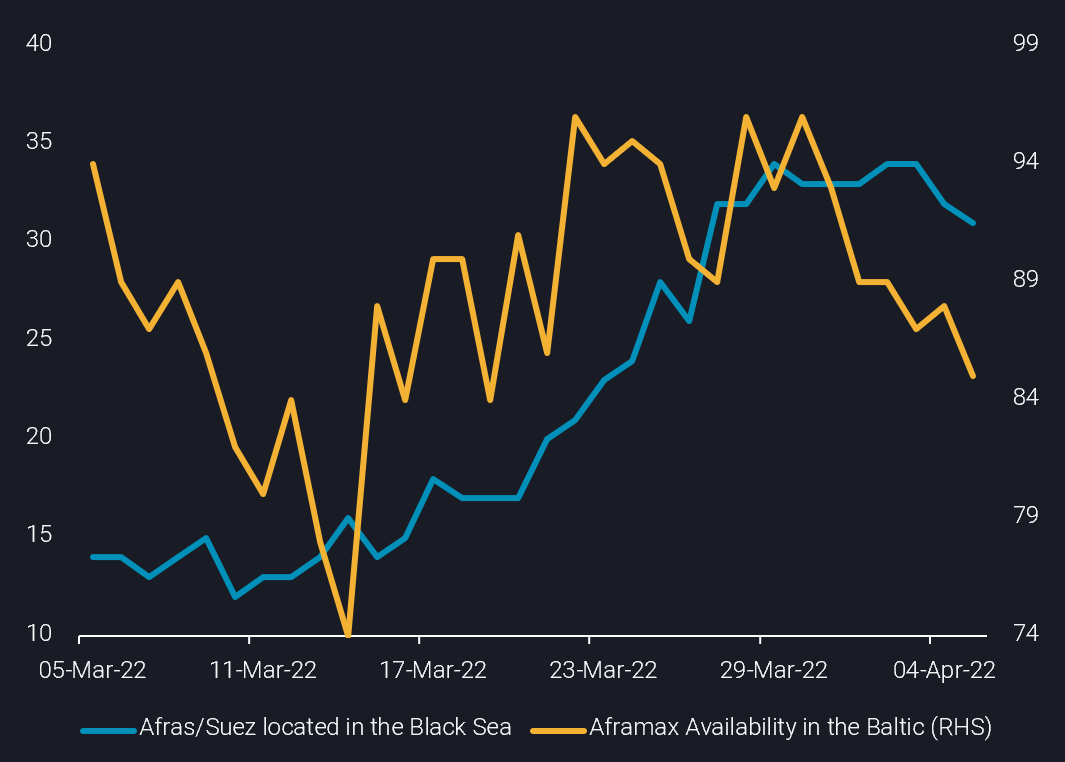 Another significant topic that has gained the spotlight over recent days has to do with the behaviour of vessels that have a tie with Russia; even at an ownership or a cargo level.  According to our data, there is not an increasing trend of AIS signals being switched off around high-risk Russian areas on a m-o-m basis. Quite the contrary, the number of vessels turning their AIS signals off in the Black Sea and the Baltic was actually halved, while the average duration of the dark activities remained similar to pre-invasion figures. In detail:

Although the facts overall do not suggest any strong pattern involving illicit activity for Russia-related tankers or tankers carrying cargoes of Russian origin, there are indications of dark activities in Russian ports. Without a doubt it is a situation that needs to be monitored closely, to gauge whether these patterns will be sustained or other whether more complex ones will arise. This is especially likely to happen if sanctions from Europe on Russian oil and products materialise going forward.

As for flows and indirectly Russian production, it can be argued that the first full month ended overall with largely sustained flows to the key European outlets. But of course, probably all these cargoes have been procured ahead of the war, and the steady deterioration of the stand-off between Russia and most OECD countries suggests that more players will stay away from Russian barrels going forward. Also China appears to be somewhat hesitant, and India alone will not solve Russia’s export puzzle, even if it wanted to.

The results are reported production shut-ins at refineries, and highly likely first shut-ins of Russian crude production. But both will amount to less than 1mbd at this point of time, still a somewhat far cry from the IEA’s call of 2.5-3mbd lost crude production. Which does not deny however that this figure may well be reached by the end of this month.