As Russian redirects its residual fuels to the East, traditional western buyers are soaking up replacement barrels from all over the world, including heavy crudes

In the five months since Russia’s invasion of Ukraine, the global residual fuels market has experienced substantial changes. Not only is the world’s top residual fuel oil (RFO) exporter forced to redirect its massive flows due mounting sanctions and boycotts, but traditional buyers in the west have also had to source often costlier alternative supplies. 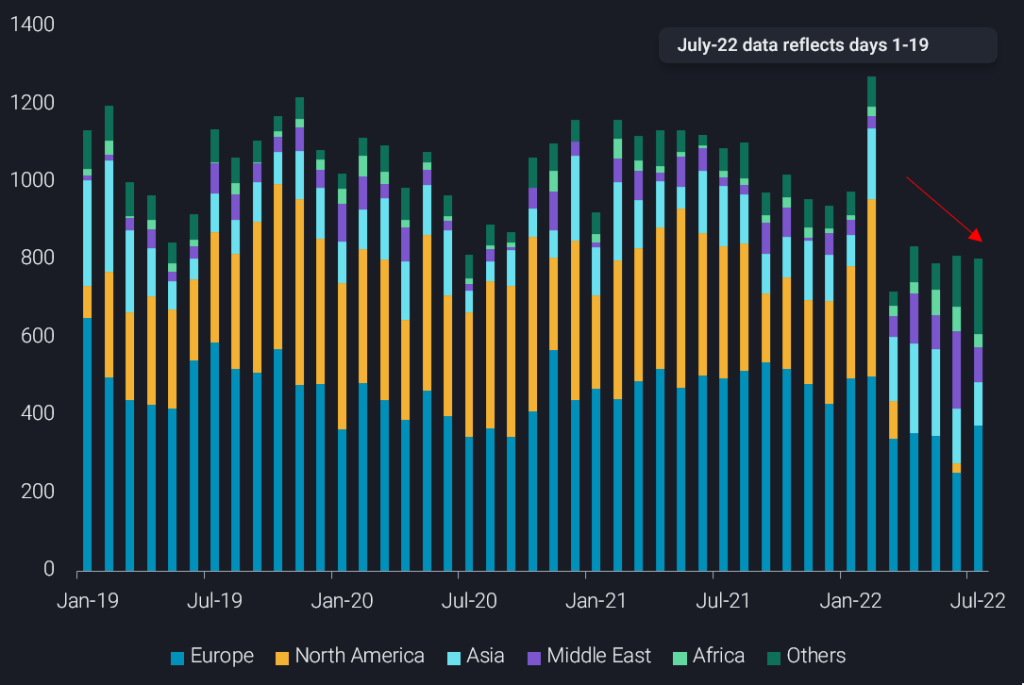 Russia exported an average 1.1mbd of residual fuel oil in the twelve months prior to the invasion of Ukraine primarily to Europe and the US, serving as an essential supply of industrial fuels and refining feedstock for these countries.

In response to its invasion, the US, along with the UK and Canada, placed sanctions on Russian oil imports, depriving Russian exporters of a significant outlet for residual fuels like vacuum gasoil and fuel oil. While the European Union has been slower to respond with formal bans given its heavy dependence on Russian oil imports, voluntary boycotts by businesses have slowed European imports of Russian RFO, which has fallen by nearly 30% in the past four months compared to year-ago levels.

These blockades have forced Russia to redirect its vast RFO exports away from the west, towards markets in the east, and even driven several refiners to dial back their refining runs, and in some cases completely halt their refining operations after their storage tanks were filled up. 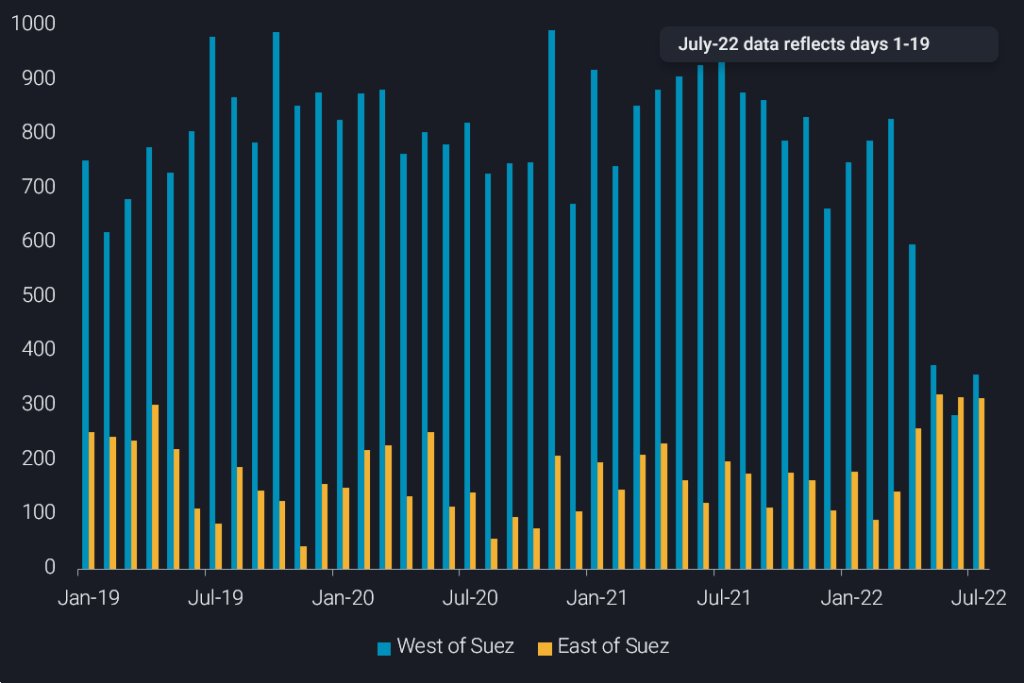 The US was one of the first nations to ban Russian crude and refined product imports effective April 22. US imports from Russia virtually stopped since the April deadline with the exception of one fuel oil and vacuum gasoil (VGO) cargo loaded onto Daytona tanker from Taman port into the New Orleans refining hub that was shown by its supplier to have originated from Kazakhstan.

Prior to the invasion of Ukraine, US imports of Russian crude and refined products have been rising over years. At its peak, US refiners imported 440kbd of Russian residual fuels in June 2021. These were essential feedstocks in secondary units of complex refineries and the disruptions to those flows were expected to be difficult to cope with.

However, the US refiners responded by raising their imports of heavier crude grades with higher residual fuel oil yields as well as RFO imports from other sources including the Middle East and Latin America. Combined US imports of heavy crude and RFO from countries other than Russia climbed to a 2-1/2 year high of 1.9mbd in May and continue to hold at elevated levels ever since then. 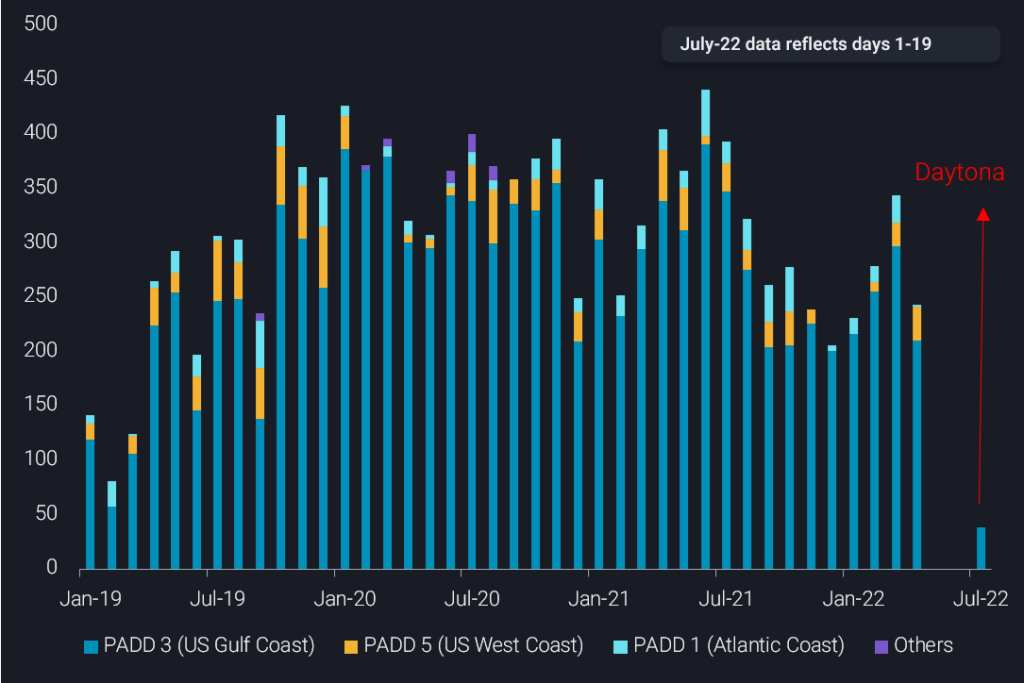 US imports by entry region of RFO from Russian ports (kbd)

Picking up the slack from the restricted western demand, the Middle East, Asia and Africa have seen their imports of Russian RFO spike in recent months. This helped cool prices for high-sulphur fuel oil from record highs in the first quarter ahead of peak summer demand for power generation in the Middle East and South Asia.

Within the Middle East, the storage and trading hub of Fujairah in the United Arab Emirates in particular saw imports of Russian RFO spike to over 150kbd so far in July, well above the previous record of 80kbd in May. Saudi Arabia has also increased its imports of Russian RFO via indirect sources including Estonia and Egypt to a record 180kbd in June. The increased flows into the Middle East also freed up domestic RFO supplies for exports to the US which was seeking alternatives to its own Russian imports.

Estonia, which has long served as a transit point for Russian fuel oil exports, has also seen its RFO exports swing away from western markets to the east post-invasion similar to Russia.

Elsewhere, Russia’s changing flows are establishing new transhipments hubs for Russian RFO including offshore Kalamata, Greece where there has been a spike in ship-to-ship transfers as well as in Egypt which has seen its imports of Russian fuel oil climb to a record 70kbd in June. As a result, Egypt’s fuel oil exports jumped to a 10-month high of 120kbd in June, mostly to Saudi Arabia. 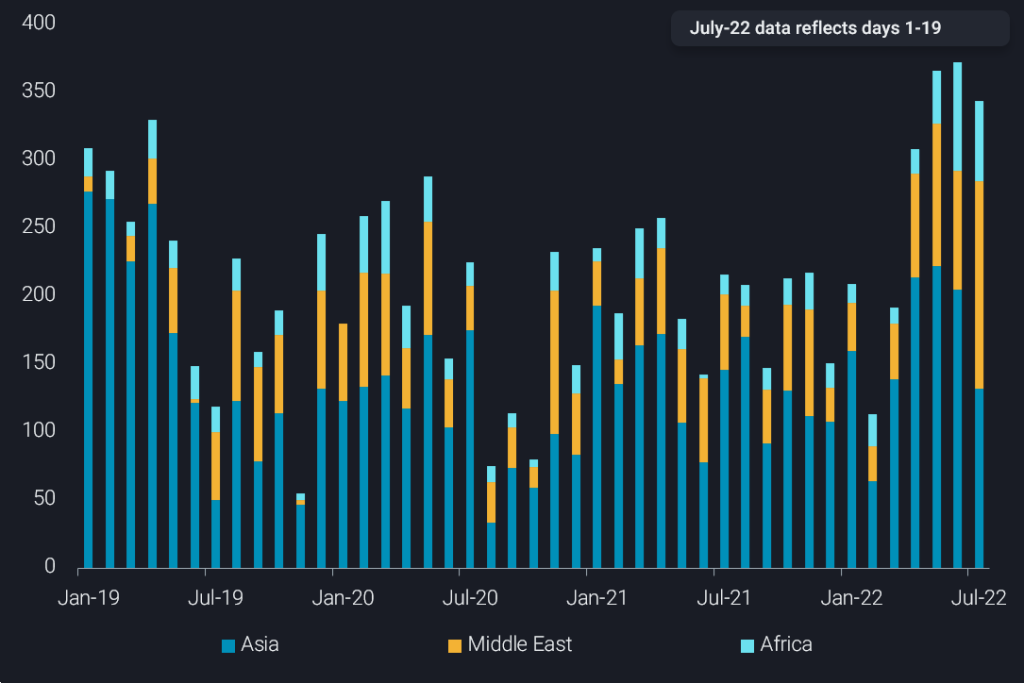 In Asia, the Singapore bunkering and trading hub also saw its imports of Russian fuel oil surge to a 16-month high of 130kbd so far this month, with volumes expected to remain elevated. While it was initially expected that China would also ramp up its imports of Russian RFO, that never materialised due to a lack of import quotas and high import taxes.

With the EU ban on Russian product imports taking effect next February, more Russian residues will find their way to the East of Suez over the coming months, keeping the region well-supplied. Europe, in turn, is widening its search for replacement supplies and has pulled in larger volumes from the Middle East over the last three months. This reshuffle of supplies may even see European players ultimately taking delivery of rebranded Russian-origin molecules which have made their way through a number of ships and storage terminals at greater costs.