Surging diesel flows – a pull or a push?
Share

Vortexa evaluates if the current large volumes of seaborne diesel on the water are a demand pull or a supply push from refineries as they max out gasoline production.

Global seaborne diesel flows are continuing their pretty steady upwards pattern observed over the last three quarters. We could even be in for an all-time high above 8mn b/d in June (excl. intra-country flows), and are set to see the second month in a row above the respective 2019 level.

While at first sight, this appears to indicate a fully fleshed recovery from Covid-19, in reality refining shutdowns and related long-haul cargo deliveries (Australia serves as prime example) are key contributors to rising diesel volumes at sea. 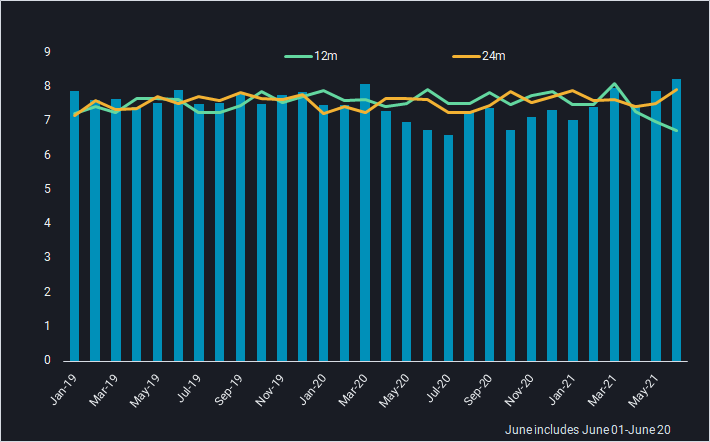 The question we want to investigate in this piece is whether rising diesel volumes represent real demand or rather reflect too much supply looking for outlets, amid overly optimistic refinery run increases which are primarily focused on gasoline and blending components production?

What is driving the waterborne exodus?

Loadings from the biggest regional suppliers, Asia, remain strong in spite of at best mediocre refining margins. The No.1 exporter, India, is a key driver of this development, with knock-on effects of the Covid crisis and logistical hiccups in recent months probably contributing to the high export levels. Meanwhile, Chinese exports appear – albeit still at historically strong levels – to be on a declining trend, as various government initiatives favour supplies to the domestic market and ultimately lower refinery run levels. 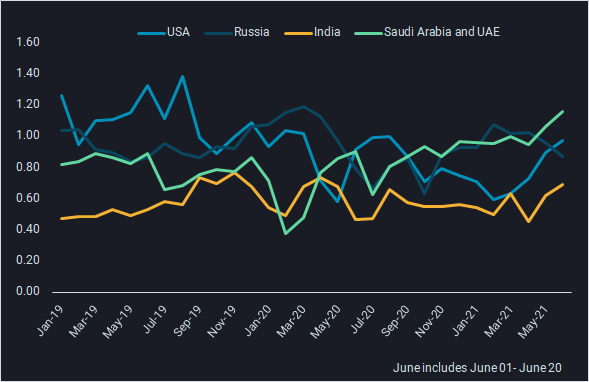 The Middle East is on solid track to reaching record export levels in the vicinity of 1.6mn b/d in June, nearly double the volumes compared to a recent low point in Q1 2020. Saudi Arabia and the United Arab Emirates are leading players, followed by a number of smaller countries. In an interesting detail, UAE exports to Europe and Asia are rising by 100,000 b/d in May/June vs. the average of the previous 18 months. This puts some pressure on the main diesel hubs globally.

The picture in Europe is mixed, and appears to be overall aligned with crude imports and therefore refining operations (see analysis of Atlantic Basin crude dynamics). Accordingly, exports from the Mediterranean may turn out to be some 100,000 b/d higher month-on-month in June.

The US (PADD 3) is clearly a driver of currently rising diesel exports, which is a function of steadily rising refinery runs, led by a strong gasoline market. Average exports are approaching the 1-mn-b/d mark, equal to last summer’s peak levels. On a side note, the US is set to overtake Russia as the single biggest exporter for the first time since last October in June (see above chart).

Where are the diesel barrels going?

Import dynamics into many of the well-established locations in Europe and Asia are relatively stable. Also, the times where PADD 1 was driving global import requirements are likely to be over. So it is up to a couple of more niche-style markets to underpin the delivery end of global diesel flows.

First and foremost in that list is currently South & Central America. The countries at the southern end – Argentina, Brazil and Chile – are currently experiencing seasonal peak demand in the Southern Hemisphere’s winter season. A combination of residential, agricultural and power generation demand is driving not only diesel but also LNG deliveries upwards (see our recent LNG analysis). Highlighting another interesting detail, some of these inflows come via STS operations in West Africa, where huge vessels from Asia, including VLCCs on their maiden voyage, are parceled out for redirection to South and Central America. 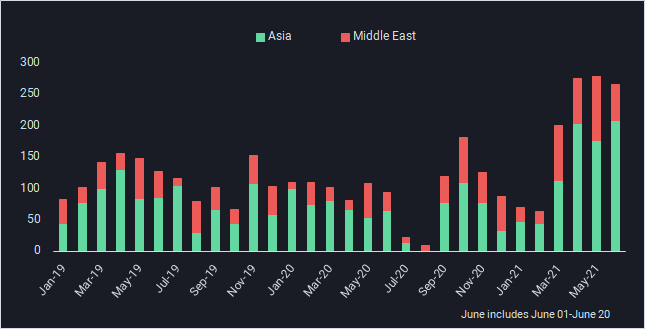 Although historically a small player in the diesel market, Pakistan’s seaborne imports are surging as a result of their switch to Euro-5 standard diesel on January 01, 2021 putting them at a deficit for low sulphur material now primarily supplied by Kuwait and UAE.

Conclusion: there appear to be quite some push elements

Adding everything up, we feel that thirsty demand centers may not be able to fully and easily digest the current wave of barrels at sea. In a potential rerun of events in March, high exports may increasingly put pressure on global diesel cracks and ultimately also refining margins, reigning in some of the marginal operations and/or holding some players back from restarting units.

Already now diesel cracks are coming under pressure in the US and Europe, following a hike  throughput especially in the former market. Diesel and heating oil futures are in clear contango, marking a sharp difference to the rest of the market. But so far, that contango is clearly not strong enough to support active storage operations, and with the current outright price structure this is also unlikely to happen any time soon. If crude remains as expensive as it is now, refiners may rather react first and cut the marginal barrel of throughput.