Dirty products are the first energy exports out of Russia showing clear signs of declines. And there are good reasons for it, as well as relevant knock-on effects, including higher prices and Russian production shut-ins.

Russia’s energy exports have so far been largely spared from a global wave of sanctions imposed on the country, but shrinking supplies of Russian fuel oil and secondary feedstocks – the world’s largest exporter of residues used in refining, shipping and power generation – are wreaking havoc on the global market. Vortexa looks at the latest trends in Russian fuel oil exports and the likely scenarios that may follow.

Russian exports of residual fuel oil and secondary feedstocks, also known as dirty petroleum products (DPP), are already showing signs of declines a month since the invasion of Ukraine. However, the real impact on exports of the fuel is likely to become clearer in the coming weeks as (self-)sanction schemes by nations and global businesses begin to bite, with loadings no longer based on pre-war deals.

So far in March, Russian DPP seaborne exports have totalled 760kbd, down from a one-year high of 1.2mbd in February and the longer-term average of slightly above 1mbd. 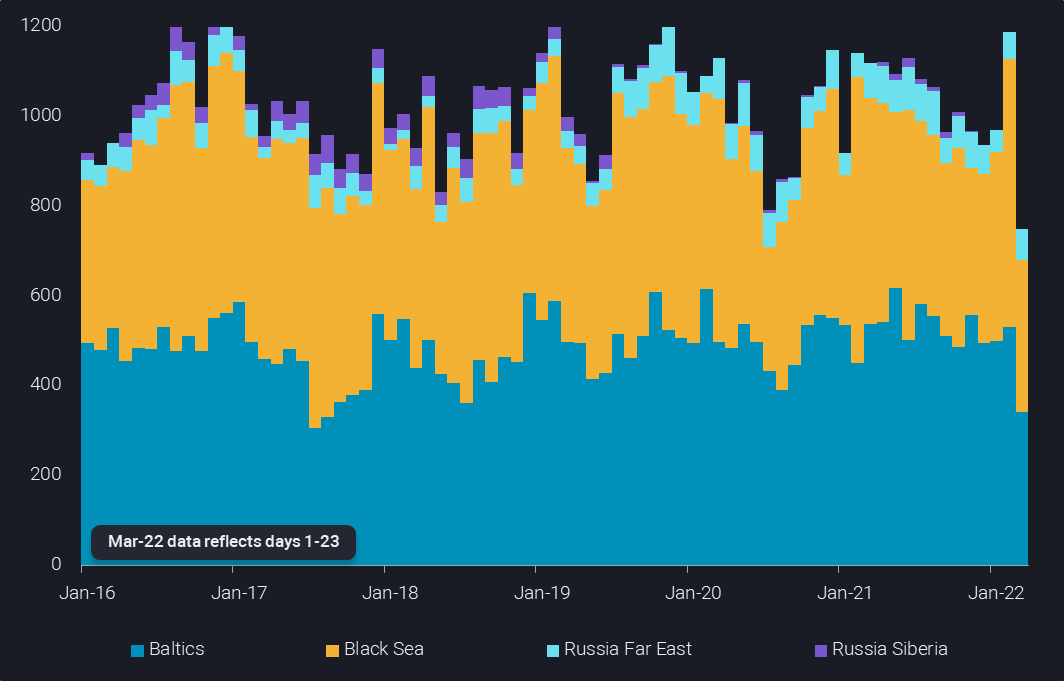 In the US, which imported more than 30% of Russian DPP in 2021 largely as feedstock, refiners are already reshuffling supplies, pulling in more cargoes from Latin America and the Middle East. DPP arrivals into the US from the Middle East are already at near record levels for April. While US refiners may struggle to fully replace Russian DPP supplies, the impact on product output and economics is expected to be manageable. 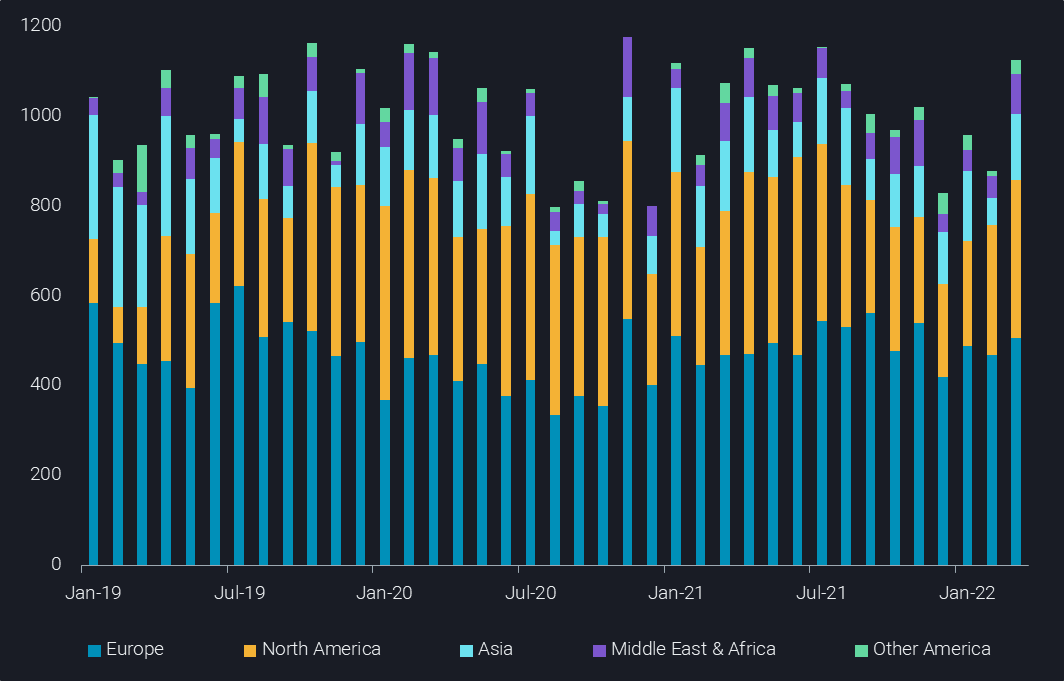 More generally, it may be fair to state that barely any player is in a desperate state to acquire Russian residues, while trading companies may well focus on crude and clean products, given stretched credit lines and tightness in all types of resources in a highly volatile and rapidly changing market. Therefore, residues are set to lead the decline in Russian energy exports. Requirements for already limited alternative barrels will boost residual feedstock and marine fuel prices to a point that demand is destroyed.

In the bunkering market, VLSFO supplies were already tight prior to the invasion of Ukraine as a global tightness in gasoil markets limited blendstock for the bunkering pool. As Russian DPP becomes less accessible and global gasoil supplies are squeezed, VLSFO bunkers are likely to remain supported at recent record levels, mounting pressure on the shipping industry since fuel accounts for the majority of a ship’s operating expense. There is quite some potential for more slow steaming as a consequence.

But even in the so far unlikely scenario that the EU joins the US, Canada and the UK in sanctioning Russian energy, a portion of Russian residual fuels will continue to flow into global markets as opportunistic trading emerges as it did in the aftermath of the embargo on Iranian and Venezuelan oil trade. 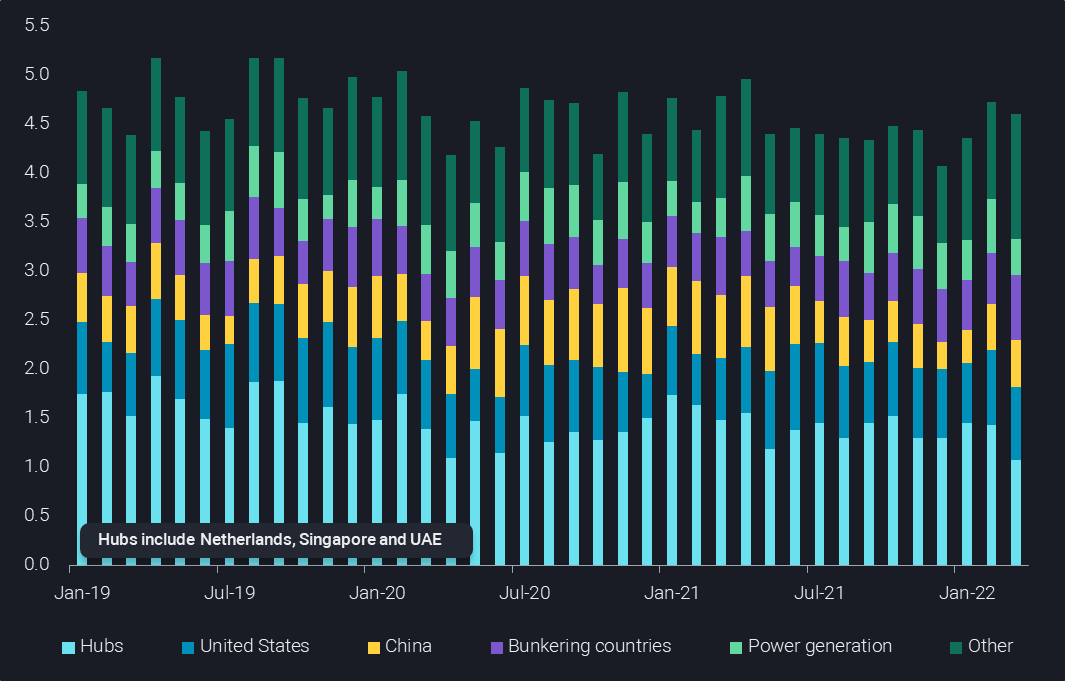 If the reluctance by China and India to cut off Russian crude oil exports are any indication, then these nations (along with others in Asia) are likely to be growing off-takers of Russian DPP. Oil trading and storage hubs like those in Singapore, Fujairah and the ARA region may also, knowingly or not, see an increase of Russian oil flows as their origins are disguised into global supply streams. But this will only provide partial solutions and not allow for all Russian residue barrels to be placed. We estimate that at least 55% of the global market appears to be largely out of reach for Russian DPP barrels, based on announced sanctions and corporate statements.

The inability of Russian players to load fuel oil and secondary feedstocks is set to clog up the infrastructure system and ultimately force refineries to cut throughput. This would of course also limit clean product supplies, especially diesel. Lower refinery runs would also push back domestic crude supply, adding to the case for production shut-ins. Mitigation strategies could involve creative storage options including rail cars, overland exports to neighboring countries, as well as boosting domestic consumption, e.g. substituting for coal, gas and diesel where feasible.