Floating storage told the story of the extraordinary moves in oil demand and supply in 2020. Tankers holding offshore stocks of crude and refined products at sea made the news repeatedly from Q2 onwards, as volumes hit record highs amid a dramatic slump in demand, and also upended tanker market dynamics. Some traders took advantage of the initial profitability to store oil at sea on account of the steep contango that emerged. Other types of floating storage pointed to the logistical difficulty in suddenly moving huge volumes barrels into onshore storage or refineries.

Below we review the pace and spread of floating storage and the impact on the freight market in 2020. With a persistent oversupply expected to carry into 2021, the rise and fall of floating storage, looks set to keep making waves.

Global clean petroleum products (CPP) in floating storage – namely diesel, gasoline and jet – hit a combined record daily high of over 100mn bl in mid-May, peaking and declining much faster than crude. But weaker European distillate markets kept volumes elevated – particularly in the second half of 2020, even as volumes in Asia began to stabilise in comparison. Global levels have fallen to around 30mn bl by the beginning of December, returning roughly to levels seen in February-March. 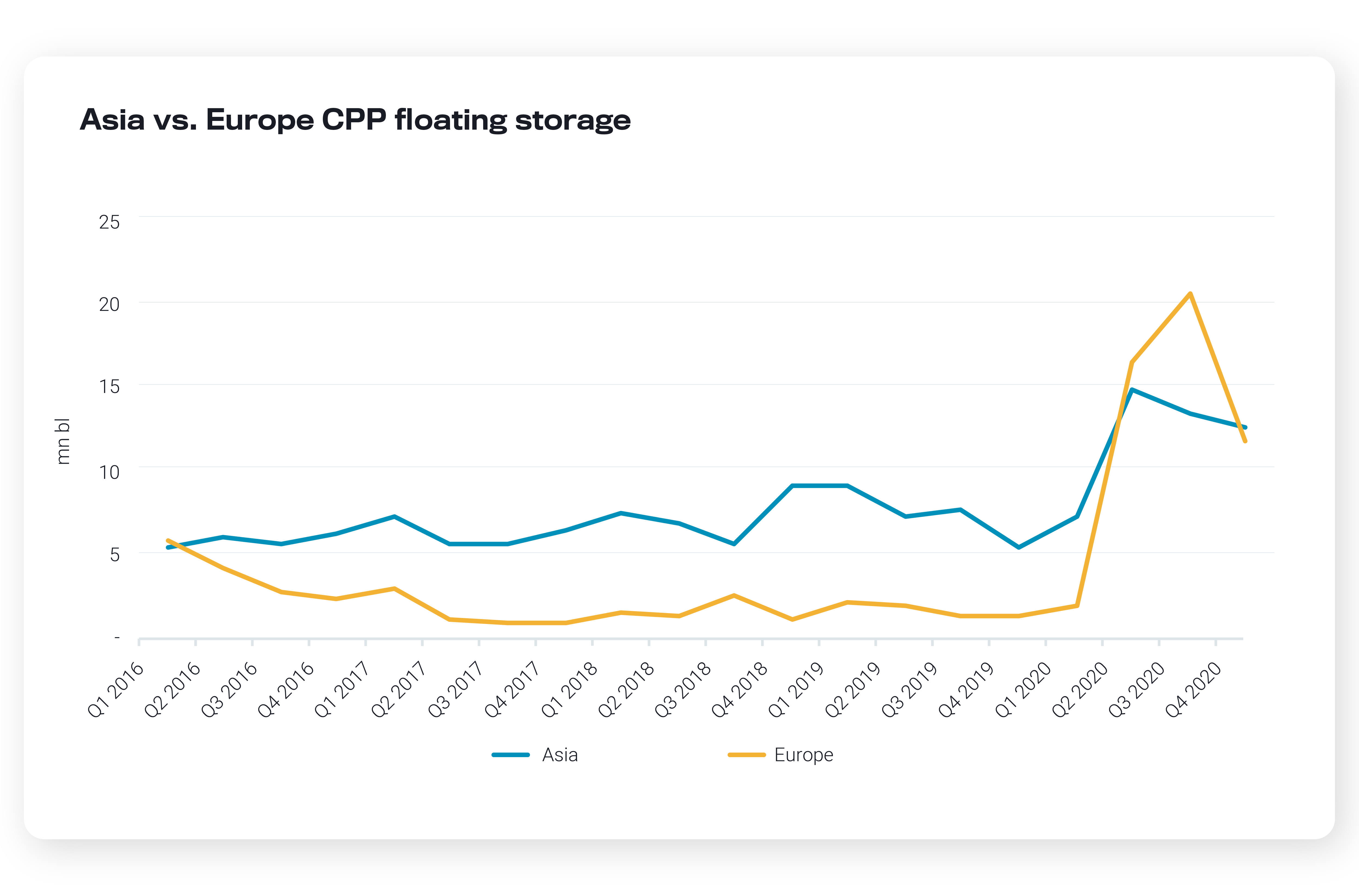 On crude, floating storage volumes rose almost everywhere globally from the end of Q1/early Q2, when the build accelerated in earnest. This included barrels accumulating in unusual locations, such as the US West coast, as well as more typical floating storage areas such as Singapore/Malaysia and North West Europe. Moving into 2H 2020, floating storage volumes concentrated around China, buoying total levels across Asia. Thereafter, subdued demand conditions in Europe lifted that region’s share in floating storage during Q4, while the US volumes normalised and accounted for a much smaller share of overall  global volumes. 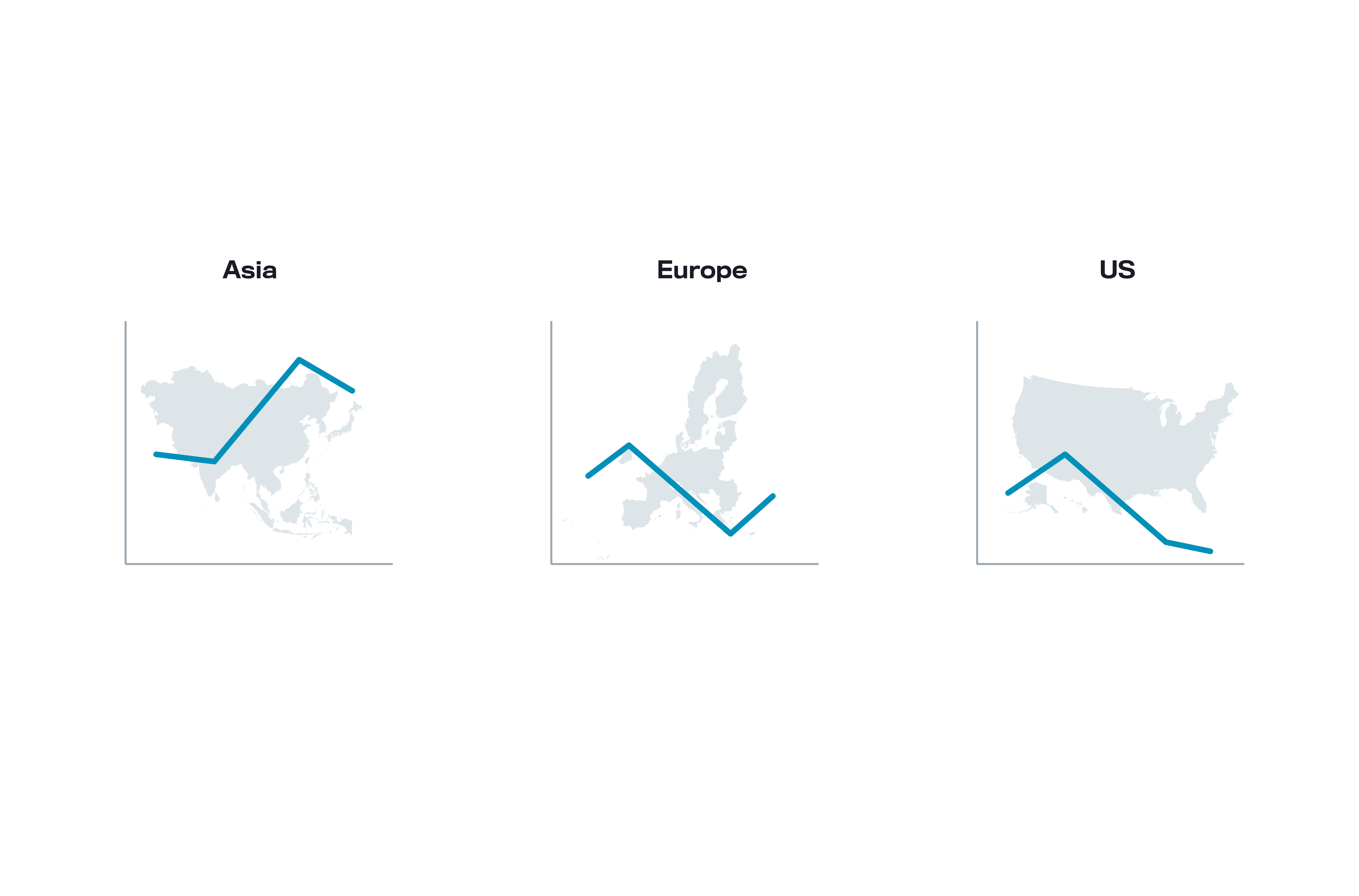 Regional share of global crude & condensate in floating storage in 2020

On clean petroleum products (CPP) – diesel, gasoline and jet – the regional share in floating storage was broadly equal between Asia and Europe, each accounting for around 20% in Q2. But as demand recovered faster in Asia than in Europe, that skewed to 25% in Asia vs. 40% in Europe in Q3, with a particular overhang in distillate products. Across the second half of the year, Europe has firmly retained the top spot for the largest share of global jet fuel in floating storage. 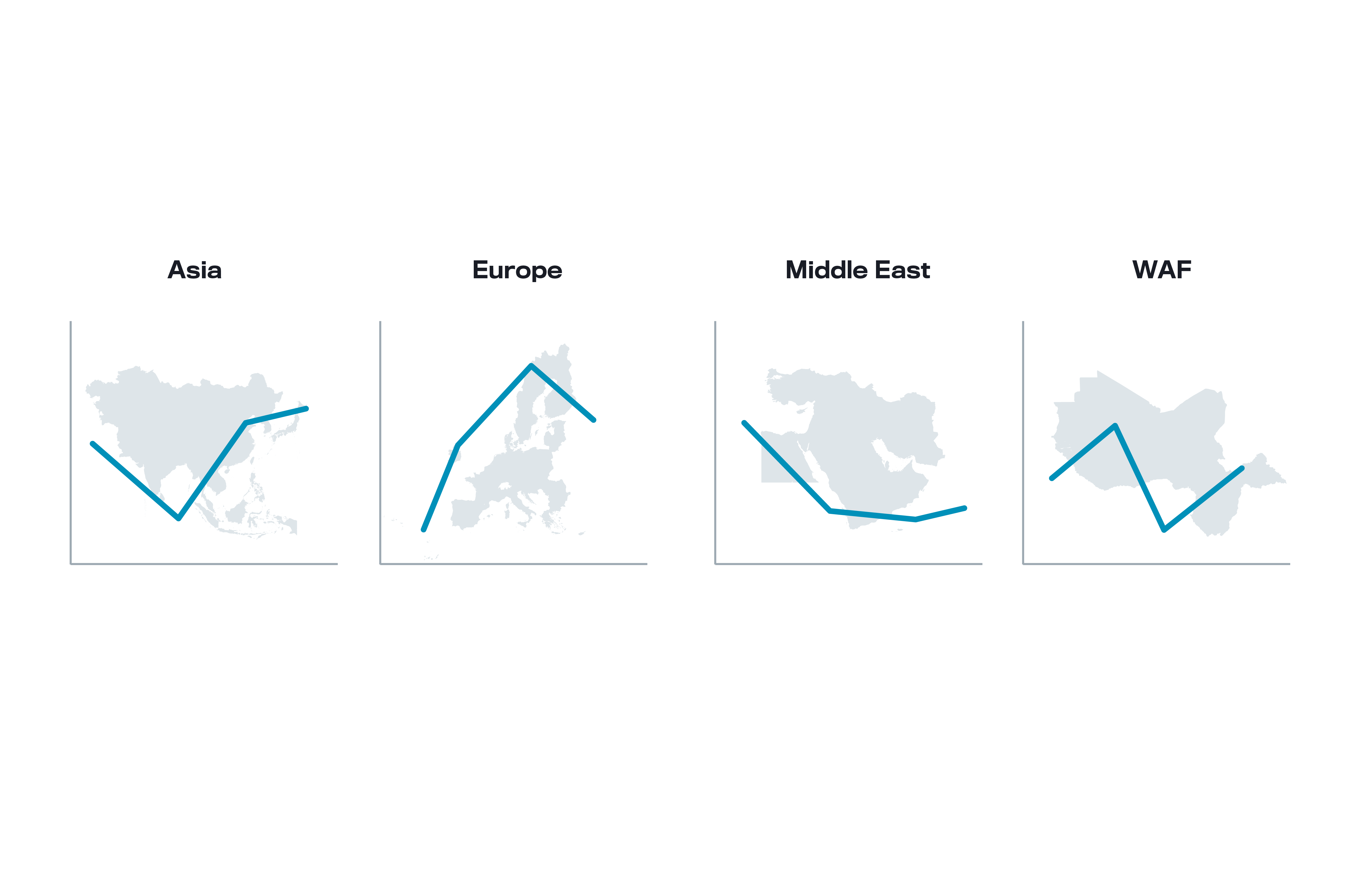 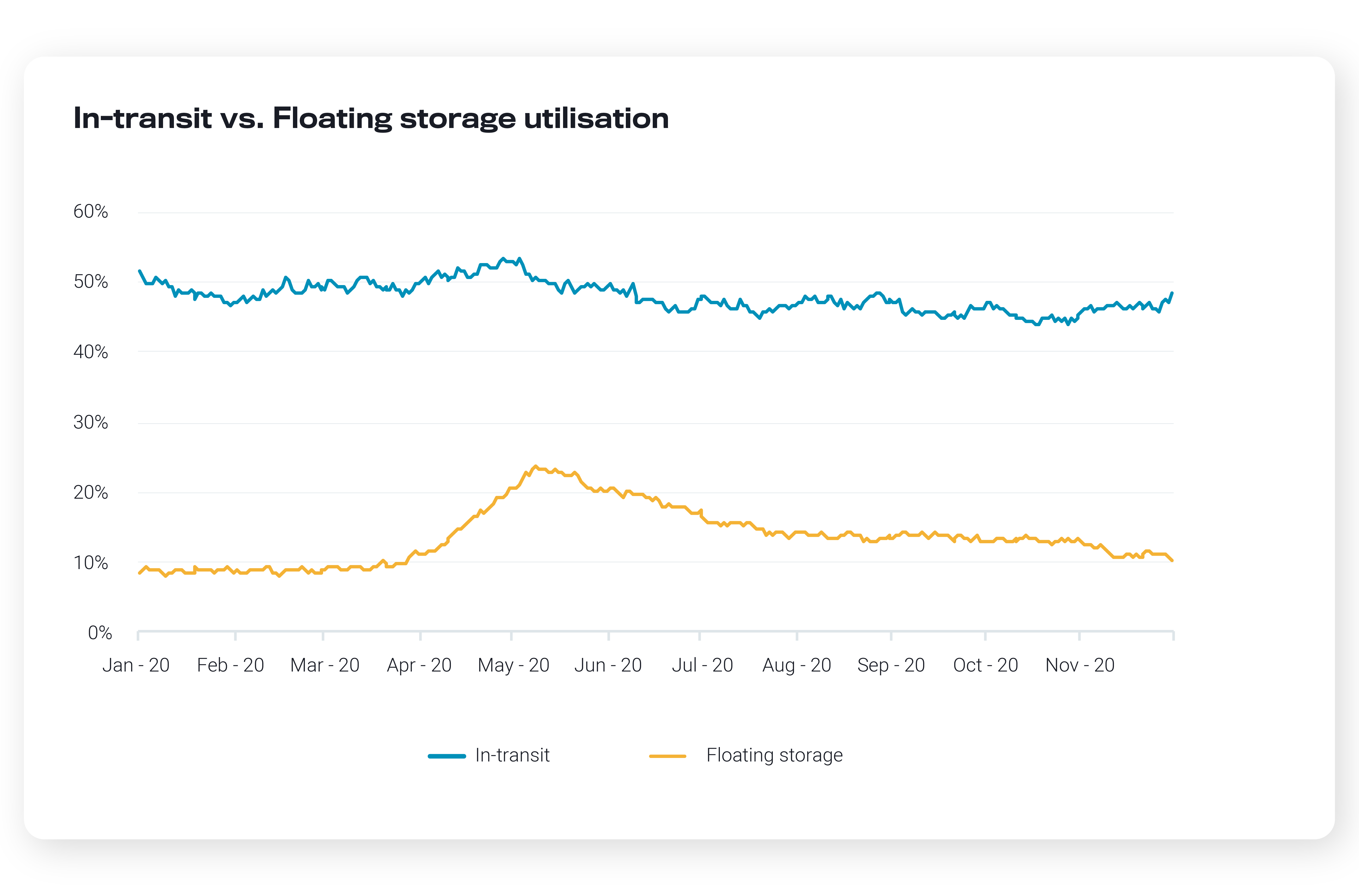 The impact of floating storage was felt unevenly across tanker classes when looking at the full year, becoming even more evident when splitting utilisation across Handysize to VLCC tankers. From May 2020 onwards, tankers were gradually returned into the spot market with the notable exception of VLCCs for two reasons:

i) The sheer economies of scale offered by deploying VLCCs, rather than other tanker classes, in floating storage 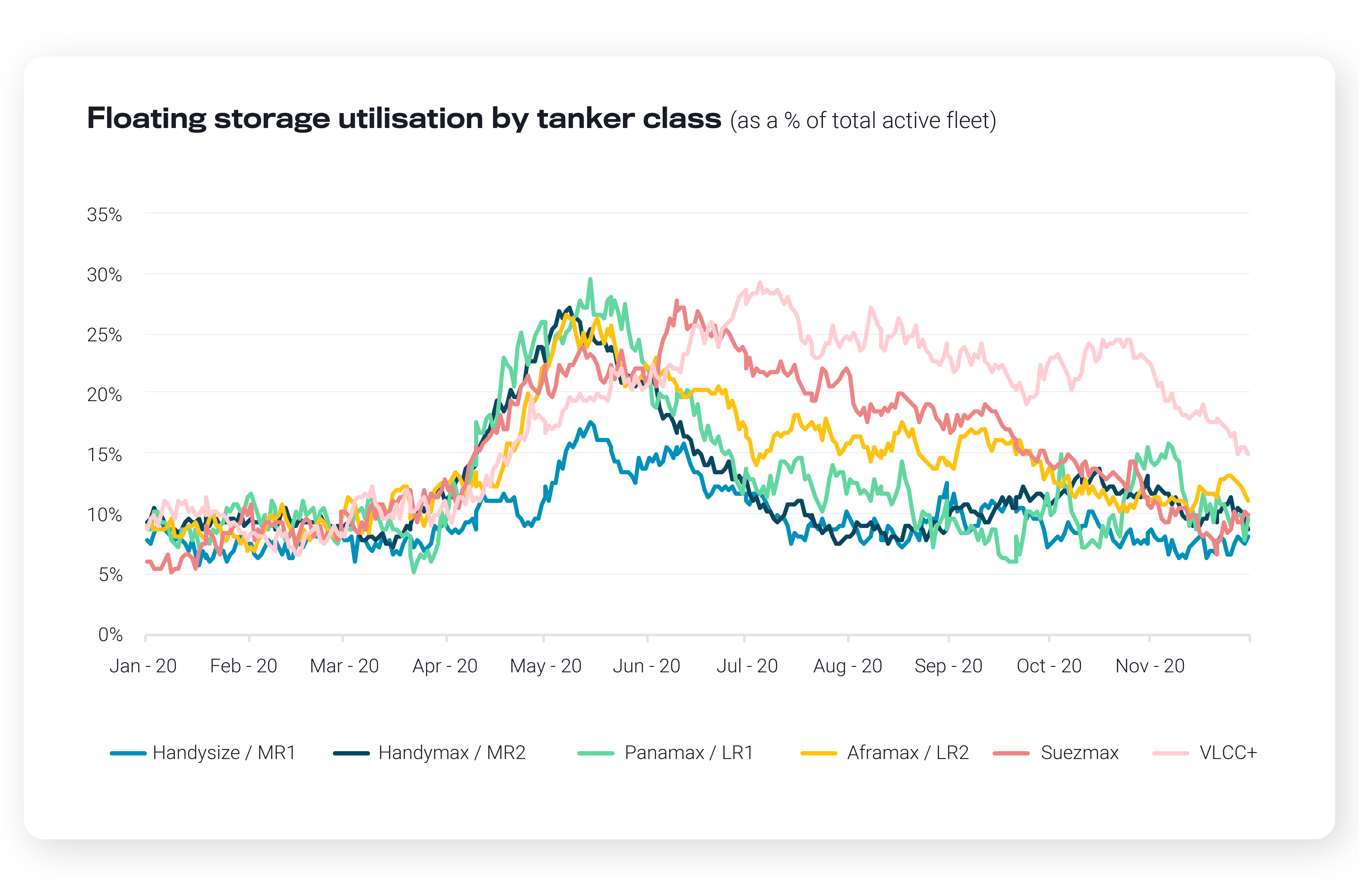 Want to know more about our leading floating storage indicators?