When will global diesel prices see a U-turn?
Share

Global diesel prices are soaring as supply struggles to meet a seasonal rise in demand. Could a turning point be round the corner?

Global diesel prices are soaring to fresh highs in recent weeks, showing no signs of abating. Market expectations of inflation-induced demand destruction, and a subsequent cooling in prices, have been ongoing for a while now. But the seasonal strength from agriculture and robust road freight, supported by fuel subsidies from governments, have derailed expectations.

Unfortunately, diesel supplies continue to struggle to keep pace, squeezed by refinery maintenance, outages and the optimisation of gasoline and jet to meet the Western hemisphere’s demand. But could a turning point in diesel prices be round the corner?

Asia’s diesel market witnessed one of its tightest periods in years earlier this month. Diesel loadings from East Asia are down to below 800kbd in June so far, after hovering at 870kbd over the past three months. India’s strong domestic demand from its agricultural sector has also curtailed the country’s June exports to 570kbd, with a miserly 100kbd of diesel cargoes headed for Asia.

Regional demand, on the contrary, has been resilient except in China. Heavy rain and floods in China have hampered construction activities, with the South China Sea fishing ban further curbing diesel demand. In the rest of Asia, diesel demand has remained robust despite rising oil prices as governments dish out fuel subsidies (South Korea), tax cuts (Australia) and introduce retail price caps (Thailand), cooling inflationary pressure on the fuel deemed as the lifeblood of the economy. Tight supplies amid strong demand have sent regional diesel cracks spiralling to multi-year highs, shutting the east-west arbitrage. With flows to the west cooling, middle distillate inventories in Singapore have seen a rebound in the recent weeks, showing nascent signs of easing regional tightness.

Europe, meanwhile, has been receiving higher diesel supplies from Russia and the Middle East. Several European countries, including Germany, Italy and Spain have increased imports of Russian diesel in June, with clarity from the EU’s 6th Sanctions Package likely boosting traders’ confidence in handling Russian cargoes until the end of the year. Diesel exports from Europe have eased simultaneously, lifting its net imports although it is unlikely to see a build-up in its diesel inventories any time soon in the current strong market backwardation. 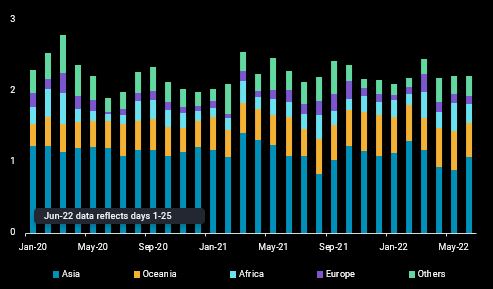 In the Americas, rising diesel import demand from Latin America including Mexico is pulling US Gulf Coast diesel exports higher in June, matching the multi-year highs seen in April, while drawing on the US Gulf Coast diesel inventories. Mexico’s refinery outages, first Salina Cruz and more recently the Cadereyta refinery, have left the country longing for more diesel, keeping its diesel imports at record highs of 280kbd with further upsides expected next month from the second refinery outage.

In Latin America, strong agricultural and winter stockpiling diesel demand has intensified competition for volumes from the US, at a time when refiners are seeking to maximise jet over diesel yields driven by positive jet regrade signals. Total diesel imports into Peru are surging to at least a four-year high in June, while volumes into Ecuador have touched an eight-month high. The good news for buyers though, is that peak harvesting season in the region is expected to end this quarter, which should see demand cooling and offer some relief on the market tightness. 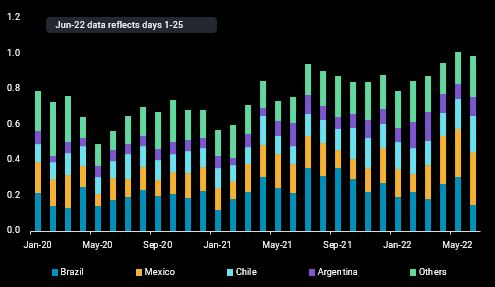 Red-hot diesel prices could see a reprieve as refinery runs in Asia and Europe rise post maintenance, while new refinery capacities including Kuwait’s Al-Zour, Oman’s Duqm and Saudi Arabia’s Jizan refinery ramp up over the next few months. Diesel demand is expected to cool on at least two fronts. First, lower agricultural diesel demand next quarter in India and South America. Second, an acceleration in inflation-induced demand destruction as diesel prices rise in the near-term, while government subsidies lag as fiscal debts increase, dampening consumer demand.

However, any easing may well be only temporary as the standoff between Russia and the EU/G-7 is turning into an outright economic war with steady escalation potential. With natural gas deliveries into Europe being curtailed strongly, likely impeding storage building ahead of the coming winter season, power shortages and sky-high LNG prices may well provide upside to diesel and other oil products from the power generation front across the globe, both as fuel in utilities, but also powering back-up electrictiy generation in industries, commercial and residential sectors.