Record diesel cracks have fostered supplies, visible in strong exports from Asia, the Middle East and the US. Also Russian diesel exports to Europe are stable at a high level. Accordingly markets are cooling and the focus shifts to gasoline and crude.

Diesel has been the oil industry’s star over the past 2.5 months. But sky-high cracks appear to be resulting in much healthier supply, as refiners come out of maintenance, shift yields and push exports, pretty much across the globe, but in particular in Asia. Also, Russian diesel exports are trending higher again over recent weeks and largely stay in Europe. The EU sanctions package currently under discussion would essentially legalise the status quo at least through the end of the year. These developments may allow diesel to take a backseat in the coming months.

Given the healthy incentives to refiners, global diesel supplies are on the rise, as is clearly visible in Vortexa export data. The most dramatic change is happening in Asia, where preliminary figures for the first half of the month see exports increasing above 1.6mbd. If sustained this would not only be a dataset high, but also up by an impressive 90% from a low point in February. Already the March/April average of 1.25mbd was up by 200kbd from the average of 2020-21. 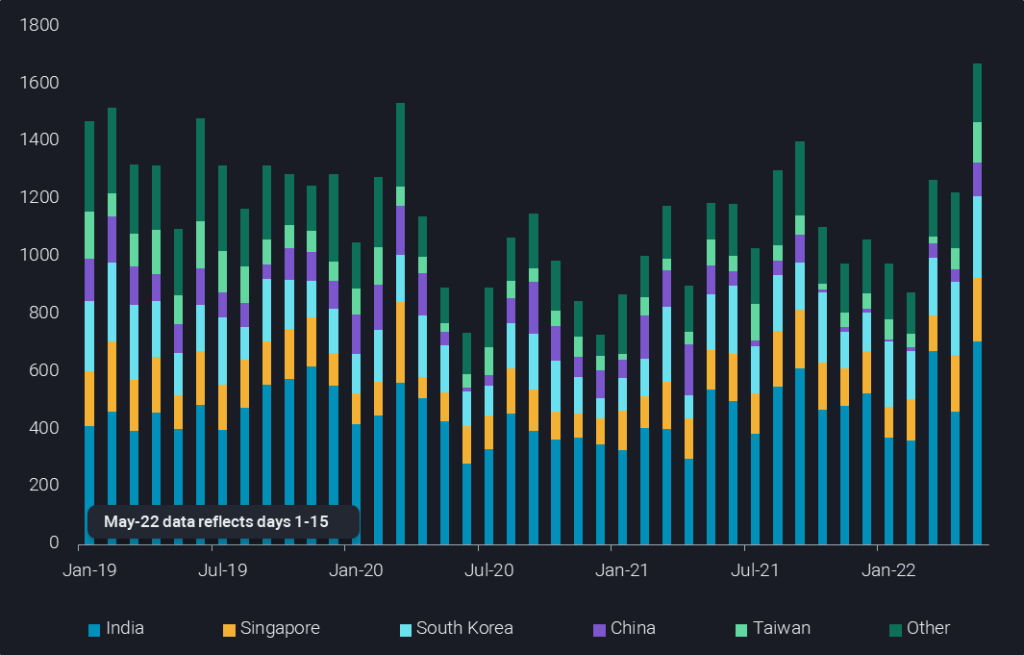 India is the one big pillar of this development. May exports are running at 700kbd, even slightly higher than the 670kbd exported already in March. While other key exporters like South Korea and Singapore are maintaining flows at a high level, China and Taiwan are currently seeing a strong pickup in exports, which is partly related to poor domestic demand. 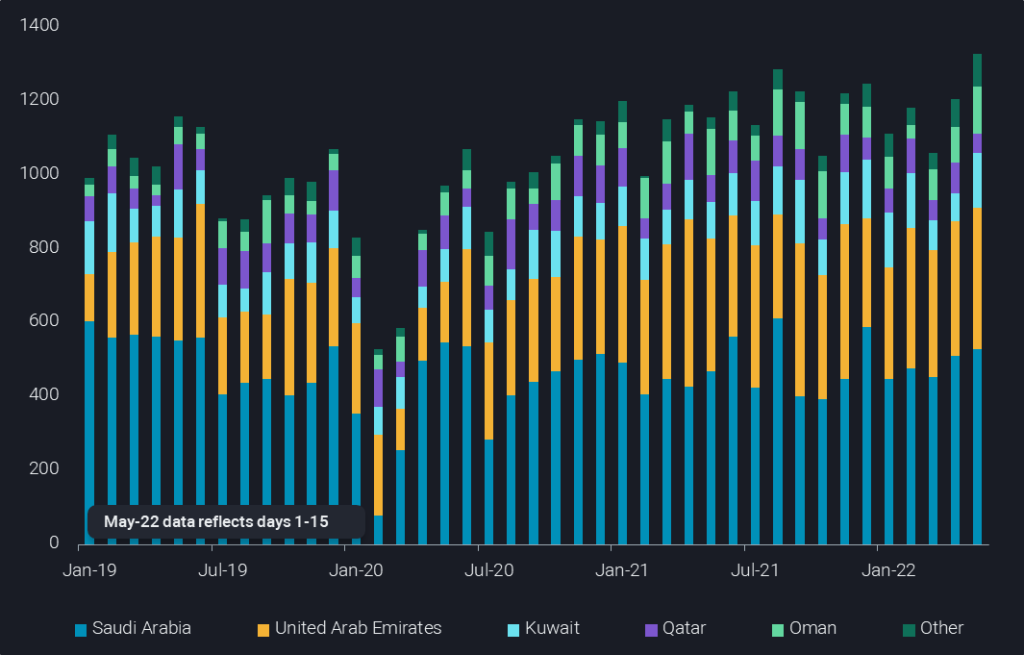 Diesel exports from the Middle East by country (kbd)

Also the Middle East may well be set for a new monthly record in diesel exports in May, based on preliminary data for the first half of the month. No single country stands out particularly, but all standard suppliers are at the high end of their range, after refining maintenance had curtailed supplies in March. Relative to that month, May diesel exports are more than 260kbd or 25% higher. 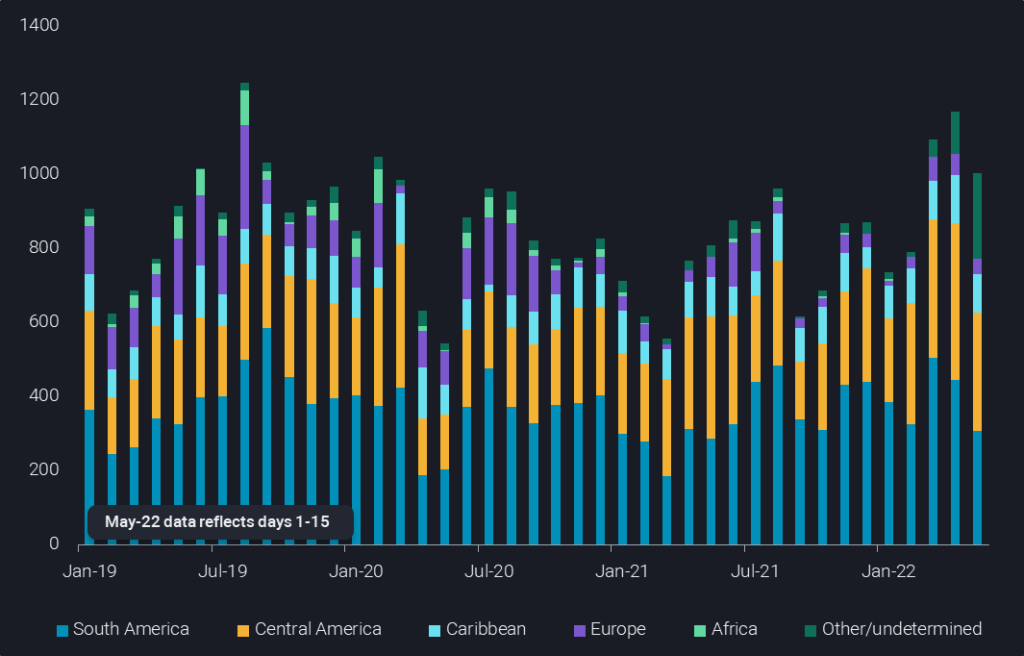 US Gulf Coast exports are set to be lower month-on-month, but the 1mbd of diesel exports tracked in H1 May would still be one of the highest figures in history. Relative to the 2020-21 average the current May figures are up by 25% of 200kbd.

High exports out of East of Suez markets and the United States are likely to stay largely in the respective regional markets and help to cool respective benchmark diesel cracks.

In the meantime, the European supply situation has improved over recent weeks based on a number of factors:

In fact, Russian diesel exports from the Baltic and Black Sea are running at about 900kbd over the last four weeks, which is higher than the 2021 average. And the trend is rather up than down. Also European, especially Mediterranean, buyers are increasing their imports rather than curtailing them further. 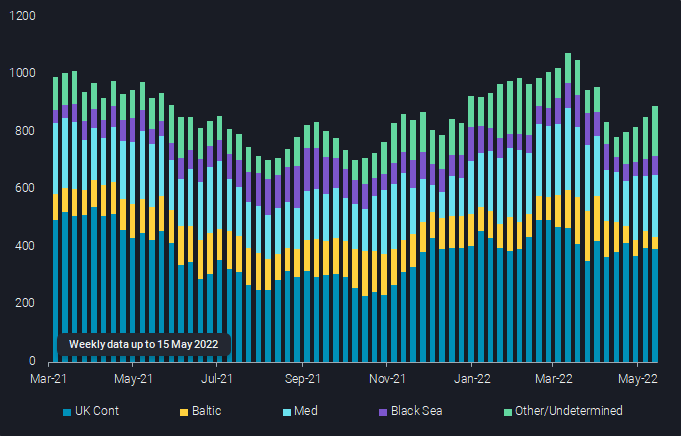 With all those additional diesel exports and less concerns about Russian supplies, European diesel cracks are currently close to $35/b, after having averaged $50/b in the three weeks to 6 May (Argus Media). That is still a historically highly elevated level, and consumption, including from the agricultural sector, is set to remain high over the coming months. But if refinery operations continue to expand over the coming weeks and months, the outlook may well be for lower rather than higher cracks. Especially, if the IEA is correct, and global refining throughput grows by 4.7mbd from April to August.

In the meantime, gasoline cracks have already taken command, and crude tightness may be on the verge of re-emerging after a couple of quiet months, as refinery runs rise and eventually there should also be some upside to Chinese demand.