Although global middle distillates have led refined product cracks for the last 2.5 months, increased supplies have prompted a downturn in diesel and jet cracks while gasoline cracks take the lead in the refinery margin complex on a global level. Propelled by low inventories and thriving demand centers such as PADD 1, Indonesia, and Mexico, refineries appear to be shifting towards gasoline production and away from middle distillates. Given the healthy economics, global gasoline supplies are on the rise as seen in the Vortexa export data.

The biggest changes are happening in Europe, the US and China where we are already seeing lifting figures in May compared to March increase by 20%, 13% and 40%, respectively. And although India’s exports pulled back in May, it is widely expected that Indian refiners will maximize strong gasoline cracks and increase seaborne exports in June. 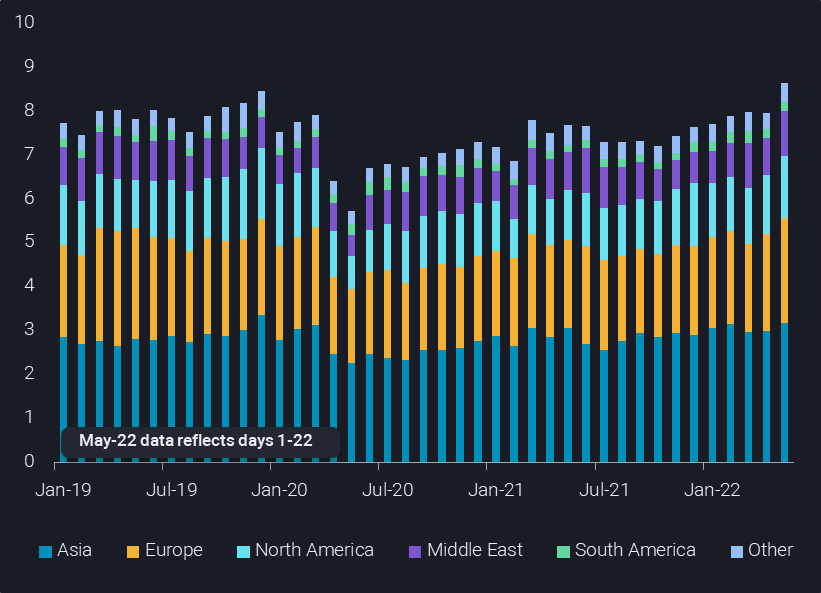 As we now enter the full-fledged driving season in the Atlantic Basin marked by the Memorial Day holiday in the US (May 30), demand is making a stellar recovery despite sky high retail prices. Driven by PADD 1, higher y-o-y gasoline demand for the first quarter has drained stocks to historical lows during a time when high Latam demand is pulling multi-year high seaborne volumes from PADD 3. The arb from Europe to PADD 1 opened in April and since then we have seen a 90% surge in imports from March to May to close this supply gap. Even PADD 5 looked toward Asia to double seaborne gasoline imports in May compared to March levels due to refinery maintenance in what is normally a relatively balanced region for road transport fuels.

Meanwhile, LatAm import demand for gasoline has taken off, led by Mexico rising to a multi-year high in May and 30% higher m-o-m. Also Chile and Peru combined have averaged 90kb of seaborne imports since January, compared to 20kb in Jan-May of 2019. We see increased LatAm import demand driven by reduced mobility restrictions, exacerbated by refinery maintenance at ENAPs Bio Bio refinery in Chile during May and the shutdown of Peru’s largest refinery La Pampilla since January.

Indonesian import demand is also likely to be on the rise after their second largest refinery Pertamina’s Balikpapan 260kbd refinery was hit by a fire on May 15. Although domestic fuel supplies were expected to be unaffected, it will likely increase demand for restocking at a high demand time of the year.  Gasoline loadings to Indonesia doubled the week of May 9-15 compared to the previous week. 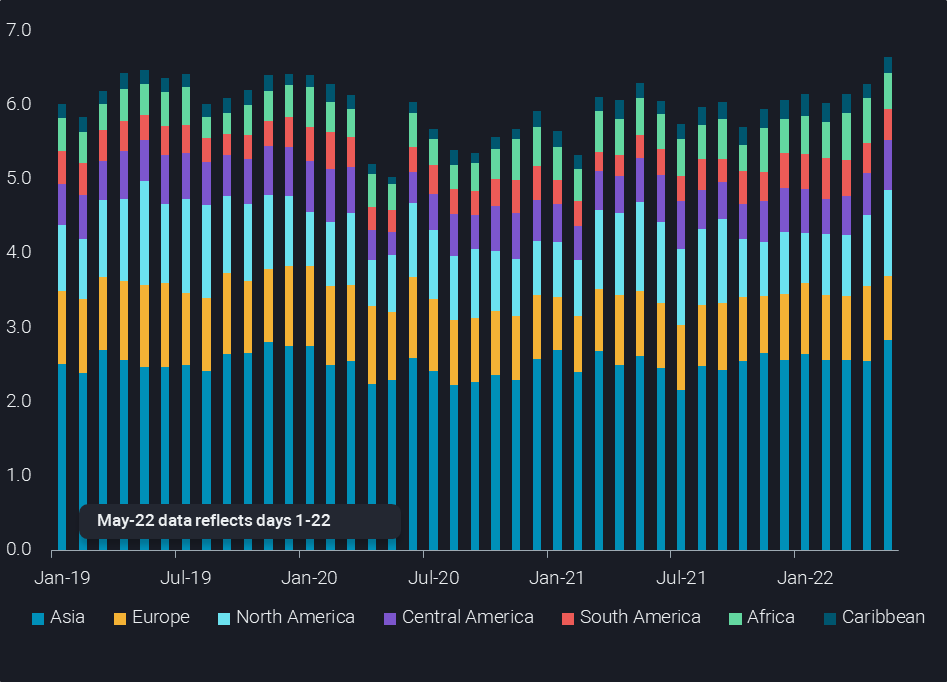 Fortunately for PADD 1, Europe has taken advantage of the poor naphtha demand in Asia and relatively stable and abundant supplies of naphtha imports from Russia, Algeria and the US for blending into the gasoline pool. Imports of octane-boosting blending components to Europe have also been on a steady rise since November 2021, allowing high quality material to be blended in Europe for export markets. 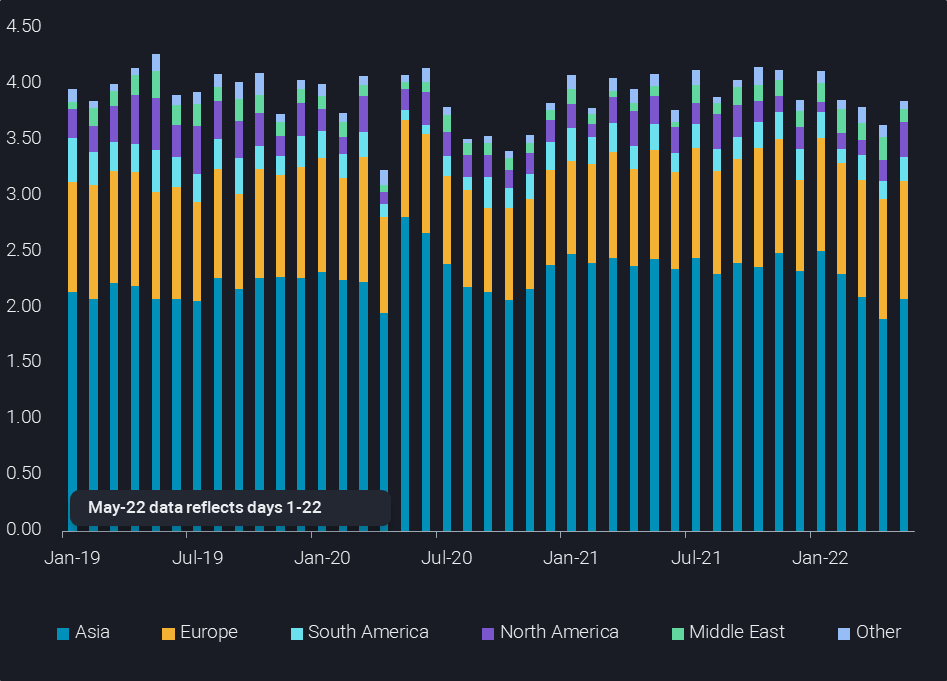 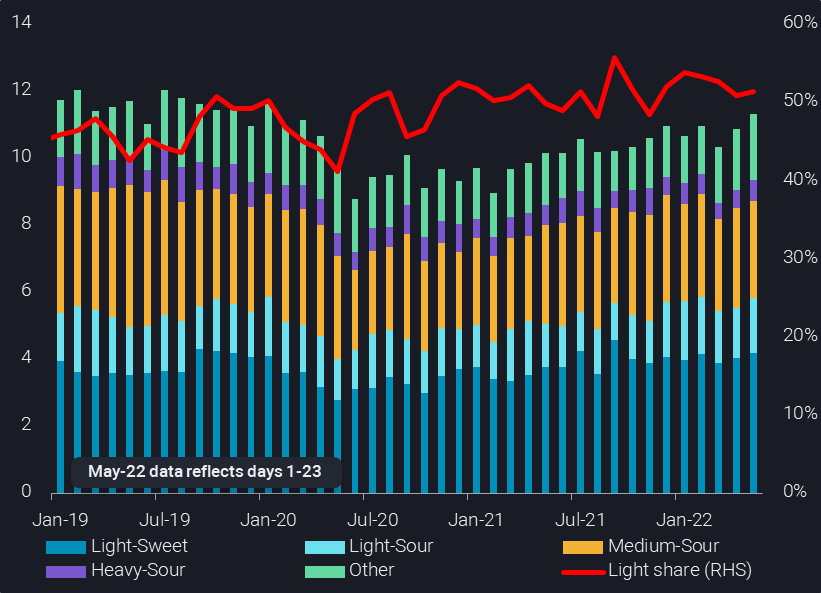 Looking ahead, we may see global gasoline cracks cool somewhat similar to middle distillates as supply increases on the back of a strong pick up in refinery runs amid this high margin environment. In the meantime, gasoline cracks have taken command, and crude tightness may be back on the table as refineries conclude maintenance in Europe and East of Suez and maximize run rates to capture the opportunities this high margin environment has to offer.