US seaborne crude/condensates loadings for Europe have remained elevated since April but as this has firmed, so too has the trend for more barrels to flow on larger tankers such as VLCCs and Suezmaxes.

US seaborne loadings of crude/condensates bound for Europe remain elevated, as European refiners continue to seek alternative crude supplies as they wean themselves off Russian barrels. Loadings of US crude/condensates for May came in at 1.5mbd vs 1.3mbd in February before the start of the Russia-Ukraine conflict. The latest indications for June remain high at 1.5mbd, reflecting days 1-20. 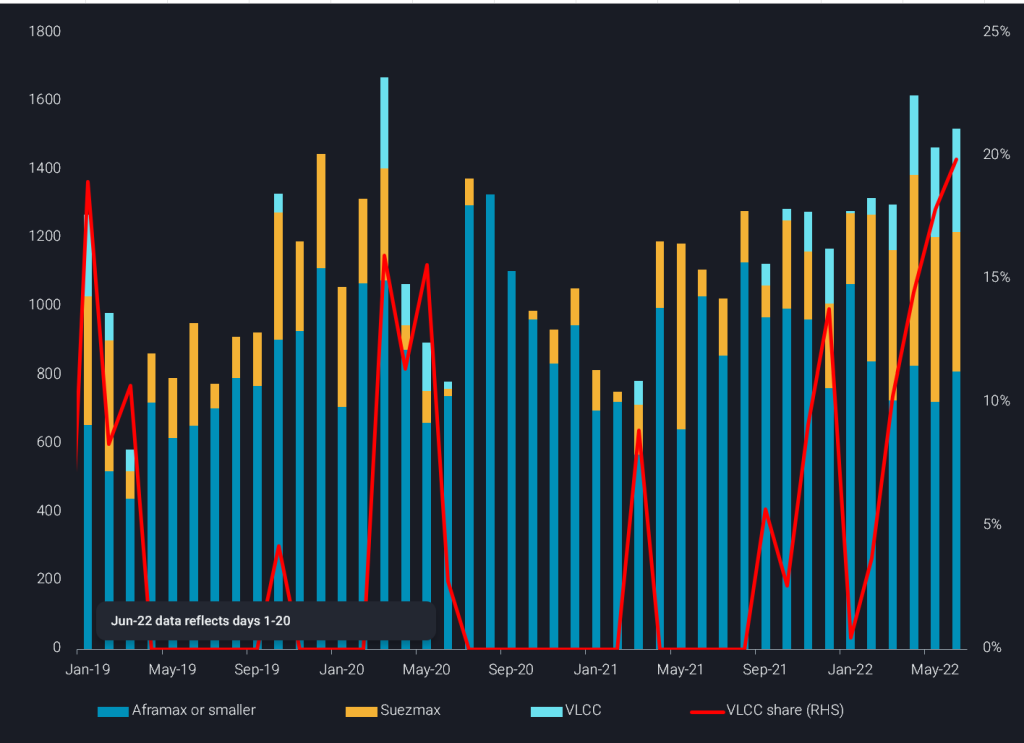 US crude/condensates export to Europe, by vessel class (kbd)

Ever since the start of the Russian-Ukraine conflict, European refiners have been looking for potential replacements for Russian crude and feedstocks. The viability of higher European imports of US crude was further accelerated as the flow of US barrels going east of Suez weakened.

Lower US crude exports to Asia, especially East Asia and West Coast India, were likely motivated by both opportunistic Chinese and Indian refiners’ purchases of discounted Russian crude. In a similar vein, Brazilian crude and residual fuel to Asia also fell in May, while those to Europe rose to 500kbd in May.

Another interesting trend shaping up is that the increasing flows to Europe are via cargoes loaded on larger VLCC/Suezmax tankers. We see a reflection of this trend also in our fleet utilization data for these tanker classes along the route.

Recent US SPR releases making their way to Europe

The strength in diesel margins and Europe’s desire to replace medium-sour Russian Urals has led to US sour crude exports (including some from announced SPR releases) in recent weeks going to Europe. So far, 100mb of the 180mb announced by President Biden have been sold as SPR releases, with deliveries slated until mid-August. Traditionally, these SPR barrels have gone to Asia, but recent developments have diverted some of these barrels to Europe. The next SPR sale of 45mb announced last week for Aug/Sept loading/delivery differs to the previous round – with more sweet barrels than sour planned to be released – meaning we can expect SPR flows to Europe to increase, going forwards.