The WTI market is set for structural weakness as rising West of Suez demand is more than offset by drastic policy changes in China and rising Middle Eastern supplies.

In early June we published a well-noted blog on the role reversal in the oil market with the Atlantic Basin (West of Suez) taking a clear lead, while East of Suez markets dropped behind. More than two months later, this changed pattern – as compared to historical standards – has consolidated further.

As expected, peak summer road fuel demand glued well with the structural recovery from the pandemic in the Atlantic Basin, boosting crude import requirements into North America and Europe. But for Asia, things have gotten even worse, with one Covid-19 outbreak after another weakening final product demand, while crude imports came under even stronger pressure from strategic shifts in China.

Amid the double whammy of strong inflationary pressures and a deepening environmental crisis, Chinese policy makers are step-by-step confirming a drastic U-turn on its domestic refining sector strategy. In recent news, sharply cut product export allowances have been confirmed in spite of strong industry resistance earlier this week, followed by a very low third batch of crude import allowances.

Over the last two months, shrinking crude and product trade quotas, closed taxation loopholes on alternative feedstocks and various other measures have not only crimped crude processing in China, but also switched the inventory policy from regular strong builds to drawdowns. The market is set to fail in fully appreciating how big of a game changer these developments are for the present, but also for the remainder of this year – on a local and global level.

We will focus in this piece on repercussions of these big picture trends on Atlantic Basin crude flows, market structure and arbitrage spreads. Starting with a final comment on Covid-19, developments so far appear to cement the better outlook for the West of Suez. The mixture of a let-it-happen attitude in large parts of the Americas and Europe with a strong vaccination campaign may dent the threat of Covid-19 on the economy as a whole, as the number of severe cases is easing (barring strong mutations going forward). In Asia, large parts of the population are still immunologically susceptible, keeping further waves a big societal risk, with knock-on effects on the economy and oil demand.

In combination with the policy changes in China, we do not think East of Suez markets as a whole have any upside in crude imports in the remainder of the year, relative to year-to-date flows. Some key players may at best make up for the losses from China.

At the same time, supply-side growth will be dominated by Middle Eastern exports, as within the OPEC+ group only the biggest producers (such as Saudi Arabia) will be able to boost production and exports meaningfully.

The minor upside possible for Russian crude exports will easily be counterbalanced by declines in other West of Suez markets, with US crude production being seen largely stagnant for the rest of 2021. 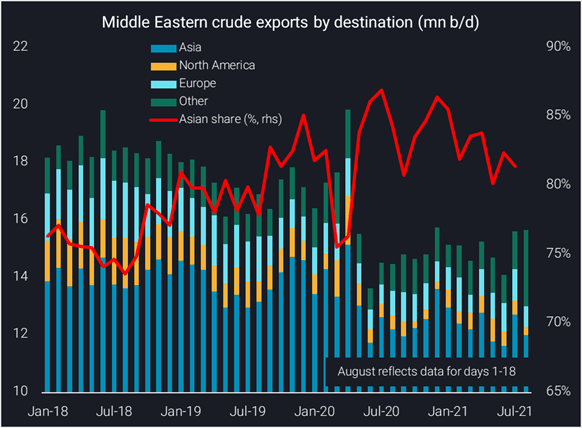 Historically, about 80% of Middle Eastern crude exports land in Asia, and we see limited reason for a major decline in that share over the coming months, even though we saw some easing established at the margin earlier in 2021.That means that very roughly an additional 1mn b/d of Middle Eastern crude will seek homes in Asia over the coming months, simply crowding out Atlantic Basin grades.

Given better demand economics, these types of stranded Atlantic Basin barrels could well be placed within their home region. Strong refining margins in the US, and the need to restock after an 80-million-barrel stockdraw from late March to mid August underpin this case.

North America as a whole (including Mexico) has seen crude imports rising in five out of the last six months, and the only outlier, August, has still room for improvement. Net-imports are zooming in to the highest range observed over the last two years, being up by 1.7 mn b/d from a peak of net outflows briefly reached last December. 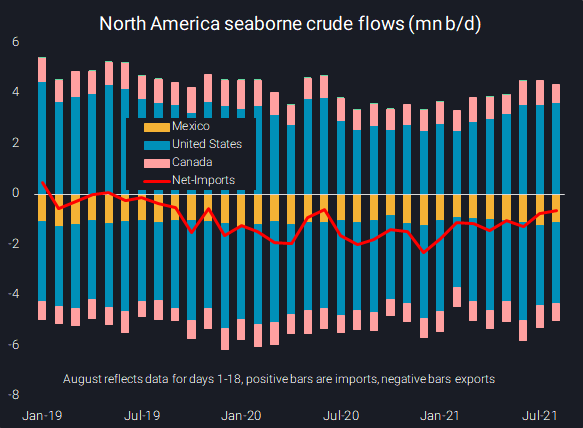 In line with the above, the latest Short Term Energy Outlook from the EIA sees US crude net-imports 100,000 b/d higher in Sep-Dec 2021, as compared to the previous four months around the peak summer driving season. At the margin, we favour even more growth, with the potential of runs not falling as much as forecast by the EIA through the autumn refinery maintenance period thanks to strong demand perspectives for US-sourced products in the Americas as a whole.

Summing up the above trends, crude markets will be fundamentally weaker in key markets for the remainder of 2021, as compared to the tightness observed over previous months, mainly driven by higher OPEC’s Middle Eastern supplies at a time of stale Chinese buying.

In recent weeks we have already seen signs of a weaker physical crude market emerging, for instance with West African suppliers struggling to place their August and September programs (Argus Media). With Atlantic Basin (and specifically US) crude being a bit trapped at home, a flatter market structure may be required to facilitate some stock building. Of course, the bigger investment mood is a factor here as well, but bullish sentiment has quietened recently on the back of more widespread concerns on economic growth.

As for crude differentials, WTI will have to price into export destinations more aggressively undermining its relative value. The Brent/Dubai spread is more challenging to call, but the repercussions of stronger Middle Eastern medium sour supplies on respective benchmarks and the lower East-of-Suez call on Atlantic Basin grades may balance out, leaving the differential largely unaffected.