How is CPP tanker demand shaping up in Q3 2022 and what does this tell us about the freight rate outlook?

The 2nd quarter is behind us and with July coming to a close, it provides a good opportunity to identify the key trends observed in the CPP tanker demand so far in 2022. 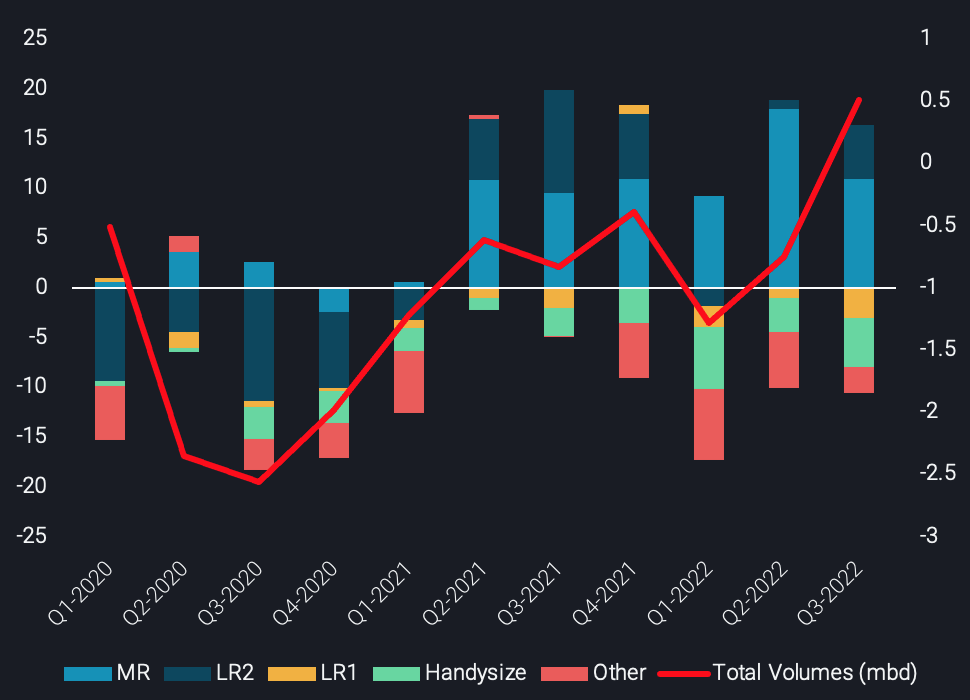 At a first glance, Q3 2022 displays a strong increase in refined product liftings. This increase aligns with the healthy freight rates seen over recent weeks. However, when zooming in on the tonne-mile demand per vessel class a different story unfolds; one which signals changes in the future development of freight rates in the CPP market.

In Q2 2022, the foundation of the stellar increase in CPP rates were MRs, backed by robust flows first in the Atlantic and then followed up in the Pacific Basin. Yet this trend is changing in Q3, as signals of weakening demand are growing.

Southeast Asian demand appears to be down considerably based on the latest import levels, while the West transatlantic gasoline flows are showing a decline followed by inventory builds in PADD 1. PADD 3 diesel & gasoline exports to the Central and South American CPP exports are the exception but the region has attracted a long MR tonnage list. Mimicking this trend, MR rates are currently tepid, following a fall from a 2-year high peak. Unsurprisingly the effects of this environment have trickled down to shipowners earnings, as MR Atlantic and Pacific baskets have dropped by 40% and 25% respectively from their 2-year highs that were achieved within Q2 2022.Nevertheless, this shortfall in MR demand is not mirrored across all tanker classes. So far in Q3 2022, LR2 tankers have gotten back into the fray, playing a significant role in the composition of the overall CPP tanker demand. Global LR2 utilisation is at its highest level since September 2021. Loadings out of the Persian Gulf are supporting LR2 employment, as utilisation out of the region is currently at least at a 24-month high. Zooming in further, the main triggers are the robust diesel flows heading to Europe with East Africa. Europe is attempting to diversify its sources to limit reliance on Russian diesel while for the latter, the biggest buyer, Kenya, maintains a healthy demand domestically as fuel prices are partially subsidised by the government – at least for now. 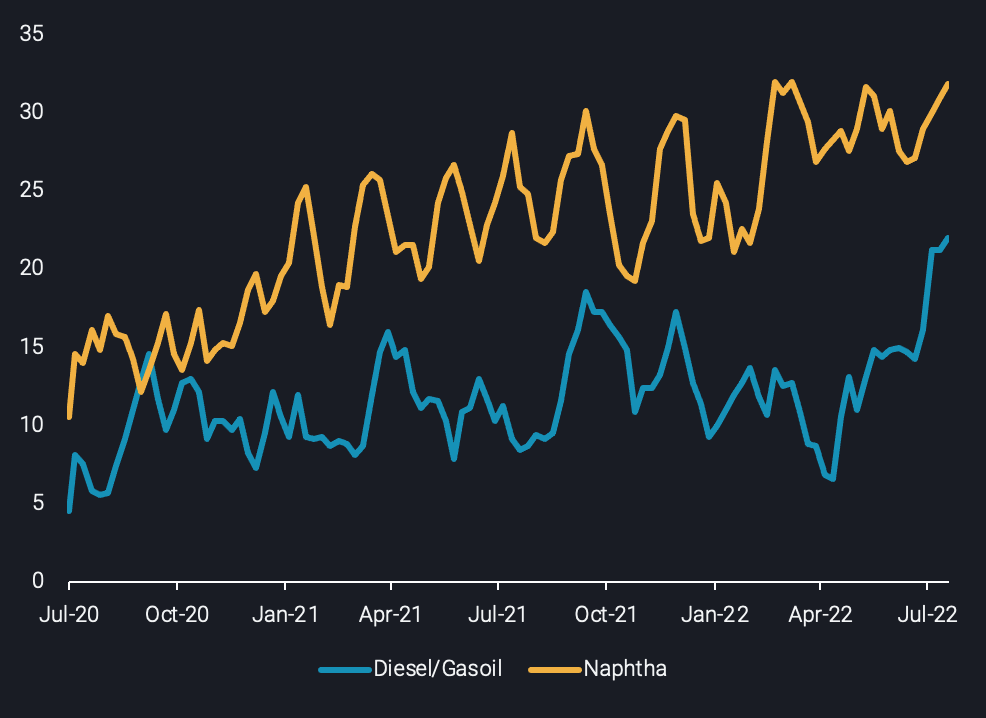 LR2 utilisation carrying diesel and naphtha out of the Persian Gulf (no.of vessels)

Diesel is the main reason for the resurgence of LR2s, but not the sole one. LR2 utilisation for vessels carrying naphtha is also trending upwards both out of the Middle East and Europe. Despite poor petchem margins, naphtha continues to flow East, as this market is the only major ultimate outlet for the surplus volumes. Also building stocks in Europe have pushed naphtha pricing into contango, forcing and facilitating long-haul arbitrage flows. It is now possible that some Atlantic Basin or Middle Eastern naphtha supplies will be curtailed in line with lower refinery margins and operations.

If so, is this enough to put brakes on LR2 demand? This is a feasible scenario in the short term, however in the long run fundamentals are looking pretty supportive for LR2 rates from both demand and supply factors. Demand-wise, Europe’s severance from Russian diesel will support long-haul voyages with Europe likely sourcing cargoes at an increasing rate from the Middle East and possibly India, while Russia will turn its exports towards Latin America – with Brazil already showing its intentions of purchasing Russian barrels –  parts of Africa, and possibly even East of Suez markets. 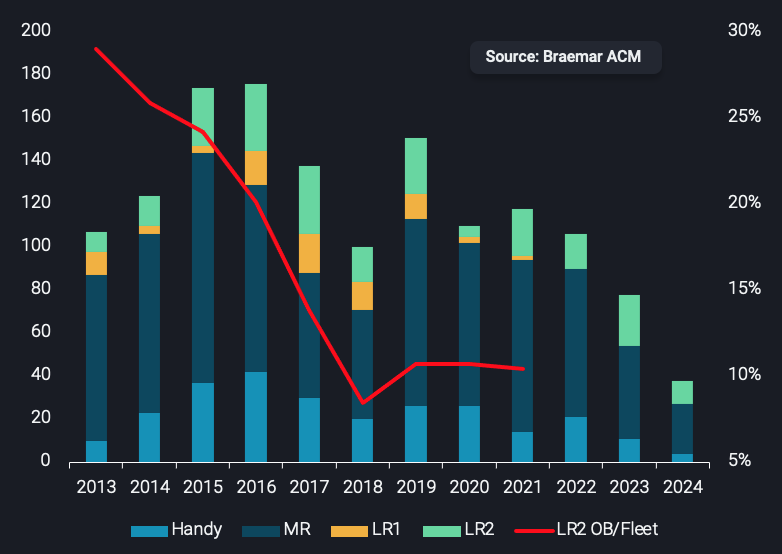 On the supply side, there is an overarching theme that is evident across all tanker classes. Stellar container and dry bulk rates in a depressed tanker environment in 2021 caused a flurry of bookings in these sectors, taking up all yards for the next 2-3 years. Although we are expecting 8 more LR2s to hit the waters in 2023 than we did in 2022, the orderbook/fleet ratio, an indicator for future supply growth, remains at historically low levels, hovering around 10%. Furthermore it is noteworthy that LR1 deliveries remain non-existent, and possibly any shortage on LR1s could be satisfied by their sister counterparts.

In a nutshell, LR rates might weaken during the quarter in line with weaker refined product trade dynamics. Yet  the combination of increasing demand for long-haul trades towards the end of the year and low deliveries will support LR2s from the end of the year and onwards, which are poised to take the spotlight from MRs going forward.