Will dark voyages take the spotlight in the new reality of Russian oil exports?
Share

With a series of sanctions and bans affecting Russian oil exports, how has the dark voyage landscape changed and what does that tell for the future of tanker behaviour?

Following the Russian invasion in Ukraine, Vortexa had conducted an AIS study to identify dark voyages in early April. The results displayed that suspicious activity was inconsistent and almost non-existent, with the majority of vessels “going dark” for security reasons within dangerous Russian territorial waters.

Having observed new and increased STS activity, fresh sanctions and a steady escalation of the standoff between Russia and much of the rest of the world, it is a good time to repeat the investigation on unusual/dark shipping practices. We focus on tankers that carried Russian crude or products and turned off their AIS for at least 24 hours in May-June. 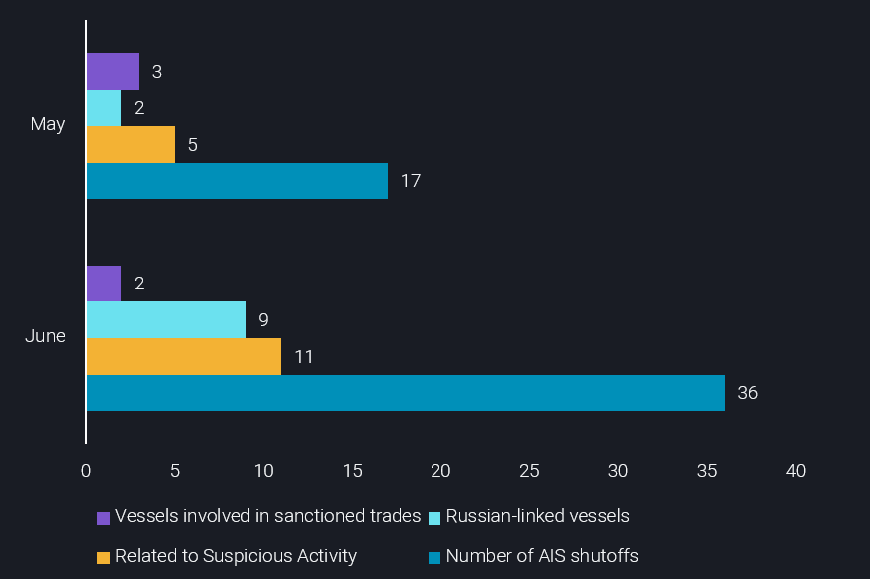 The main findings of the study are listed below:

When it comes to the types of suspicious activity there is a divergence between the two months:

One of the sanctions that have been drawn against Russian trade, but that has not yet come into force, is the coordinated EU and G7 insurance ban on tankers carrying Russian oil and products. This decision aims to curtail Russian exports to third-party (non-EU/UK and non-US) countries, or at least to make them significantly more expensive. This is because the majority of the shipping insurance market falls under EU jurisdiction, although alternatives in smaller insurance markets in India, China and Russia exist, which could potentially facilitate trades. Nevertheless, there is no doubt that this decision will have repercussions on the tanker market. The recent AIS manipulations from tankers carrying Russian oil shed light on how tanker behaviour is likely to be shaped once the insurance ban is in force.

Firstly, a greater involvement of the Russian-state-owned or Russian-owned affiliated tankers in the country’s oil exports is likely. It should be noted that although the state-owned Russian tanker company was financially sanctioned, its fleet has not been sanctioned from trading. As a matter of fact, several of these vessels operate either in intra-Russian trades or on the Far East Russia – East Asia route. With the implementation of the insurance ban, Russian-tankers could be more actively involved in Baltic or Black Sea trades, covered from the Russian insurance market.

Furthermore, tankers that have previously been involved in Iranian and Venezuelan trades would attempt to fill the gap left from G7’s decision. Since the Russia-Ukraine conflict started, there have been 48 cargo movements of Russian oil (excl. CPC blend) carried on tankers which have previously carried sanctioned Iranian and Venezuelan oil. This equates to 28 unique tankers, as some of these tankers have conducted multiple voyages since the conflict started. Currently, we track three tankers which have loaded Russian oil in July which have previously carried sanctioned oil. As more companies refrain from exporting Russian crude and product, those familiar with the sanctioned crude trade continue using their vessels to assist Russia in exporting oil to the East. 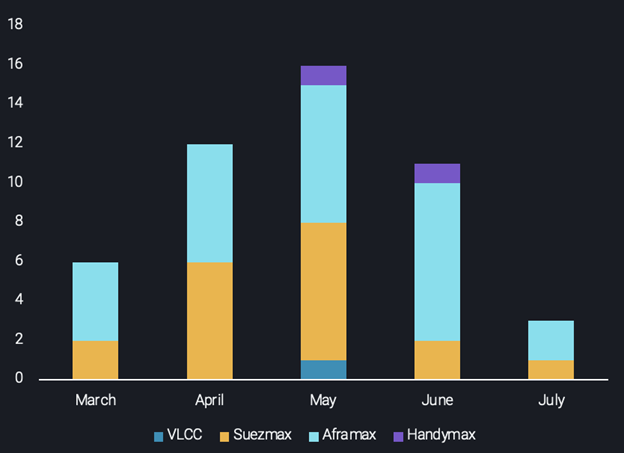 Finally and more importantly, it is quite likely we see a rise in dark voyage activity going forwards. Shipowners will be required to notify their insurers when calling at a Russian port, hence there could be cases where we see vessels visiting Russian ports switch off their AIS transponders, as noted within the study findings. It is even more likely, however, to observe complex cases of STS activity. All three of the dark STS cases recorded in June involved vessels loading in the Russian Baltic Sea before performing STS transfers while dark outside the Azores.

Another question is at what frequency these movements will occur and the answer is dependent on the level that Russia will maintain its exports. Currently, Russia’s relationship with the rest of the world seems to be deteriorating. Gas prices are once again rallying due to various export curtailments to European buyers, while CPC exports are coming to a halt following a Russian court order. Russia continues to use oil and gas as a weapon for energy deprivation but will this work in its favour or will it act as a boomerang? For now, facts tilt towards the latter. Countries with a more neutral stance seem to distance themselves. This means fewer buyers will procure Russian barrels, which subsequently will cause a dip on Russian exports. At the same time, though, Russia’s economic reliance on oil movements out of the country deems the concealment of these movements even more significant. Thus the complexity of dark voyages could intensify going forwards, though only a smaller number of ultimate buyers may be involved.