Middle East crude export surge – but for how long?
Share

With OPEC+ going through a standoff concerning the future production policy, a spike in crude exports in early July raises eyebrows. We investigate how sustainable this development is likely to be.

With OPEC+ going through a standoff concerning the future production policy, a spike in crude exports in early July raises eyebrows. We investigate how sustainable this development is likely to be.

Similarly high exports have been last observed before April 2020, which itself has seen much higher exports amid the temporary price war between OPEC+ proponents that- together with the Covid-19 repercussion – drove oil prices close to zero. 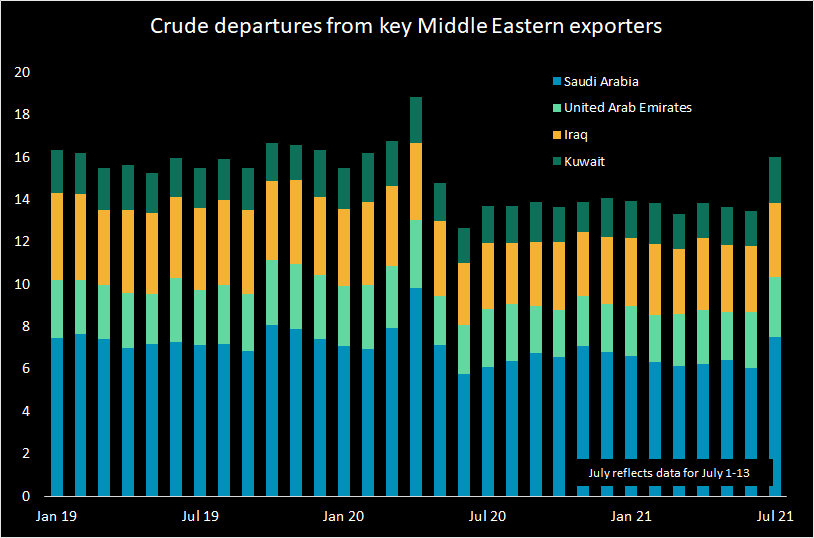 While looking spectacular and meaningful at this point of time, the window of observation is too small to conclude on ultimate monthly loading figures and bigger picture messages. Daily variations in the loadings from the above four countries so far this year have ranged from 4 – 25mn barrels, and longer runs of stronger or weaker loadings are not uncommon, albeit at 13 days in a row this is getting unusual.

An increase in exports from key OPEC players would also be expected, after Saudi Arabia, UAE, Iraq and Kuwait have actually seen falling exports in May and June, at a time when production targets have already been relaxed. But the increase in supply would be expected to be up to 1mn b/d, and not 2mn b/d or more.

At any rate, our vessel availability screen shows a strong reduction in available VLCCs and Suezmax in the Persian Gulf for the next 14 days. On that basis, the monthly average for July could even fall back to January – June 2021 average levels. 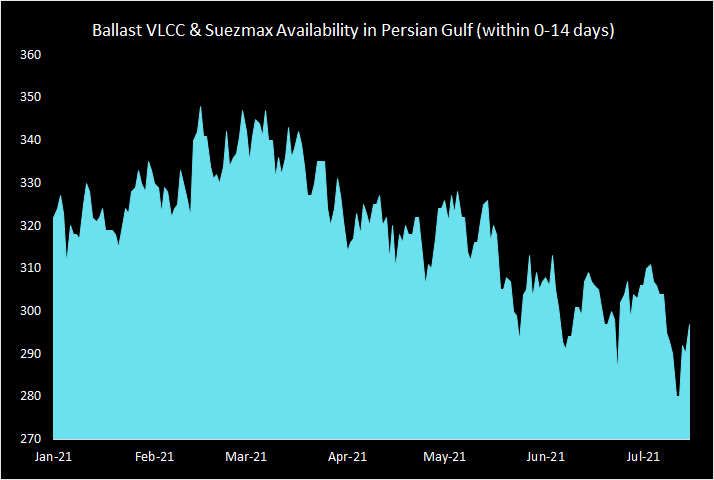 Without question, this jump in exports from countries like Saudi Arabia and UAE is peculiar at a point of time where these players are in a standoff concerning the future production policy of OPEC+. The narrow time window makes planned efforts as some type of warning signal or temporary free-riding questionable. But this latest development may very well contribute to finding and accepting a compromise amid all OPEC+ members, warming up the memories of April 2020, especially amid another covid wave in Asia. Rumours of a more or less imminent solution have spread through markets recently.

Meanwhile, for now the 13-day stretch of high exports does not mean that Asia will get flooded with crude. The marginal cargoes are likely to make the relatively long journey to China, diluting the impact over time. Higher exports now would also help to make up for the very low exports in the second half of June. Finally, some of these cargoes could temporarily head to storage destinations held by the exporters in Northeast Asia. At any rate, there are no signals yet from a pricing perspective that the recent tightness in physical crude markets is easing, and any additional available cargo to Asian refiners is welcomed.