Surging diesel prices have been at the forefront of market news in recent weeks. Can clean tanker markets benefit from this pricing trend?

Surging diesel prices have been at the forefront of market news in recent weeks. We have previously identified a global tightness in diesel supply as the main driver of this surge, however a recovering demand is also expected following easing lockdowns, continued European winter demand and potential inventory replenishment. If this indeed is the case, this has the potential to benefit clean tanker markets tremendously.

Clean tanker freight rates ended Q4 2021 on a mixed note. Reduced CPP volumes out of China limited an improvement in rates for MRs to below their summer high for East of Suez benchmark routes, though strong petchem demand for naphtha cargoes helped buoy LRs. In the Atlantic Basin rates had recovered to near-year highs during Q4 but dropped at year end as a new Covid variant spooked markets and led to renewed lockdowns.

From our fleet utilisation and freight pricing screens we see:

If diesel prices are indeed a function of strong diesel demand, an increase in cargoes in the market would have the potential to lift both markets, specifically the Middle East & India to Europe trade as well as the trans-Atlantic trade from/to the US. 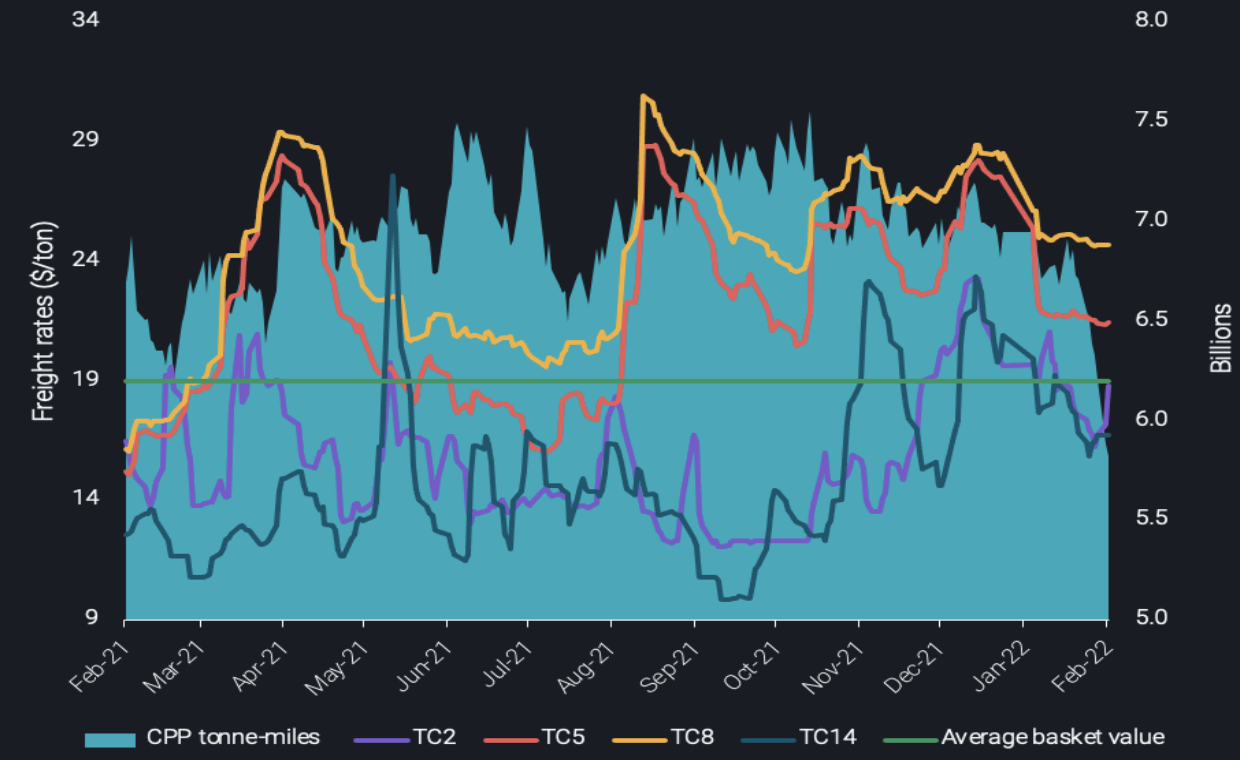 On a global level, diesel imports have reached an 11-month low in January at 7.2mbd, down 0.7mbd from a peak in November. As evidenced by the chart below, the drop in Atlantic Basin imports is the main culprit, having dropped in excess of 10% in the last 3 months according to our data, from 4.2 mbd a day in September to 3.7mbd in January. This seems to support the hypothesis that strong diesel prices are mostly driven by supply tightness.

In addition, the touted recovery in demand has to be questioned by stagnant diesel cracks in Europe, even though imports into Northwest Europe have fallen for the second consecutive month, from 1.6mbd in November to a record low of just 1.1mbd in January. 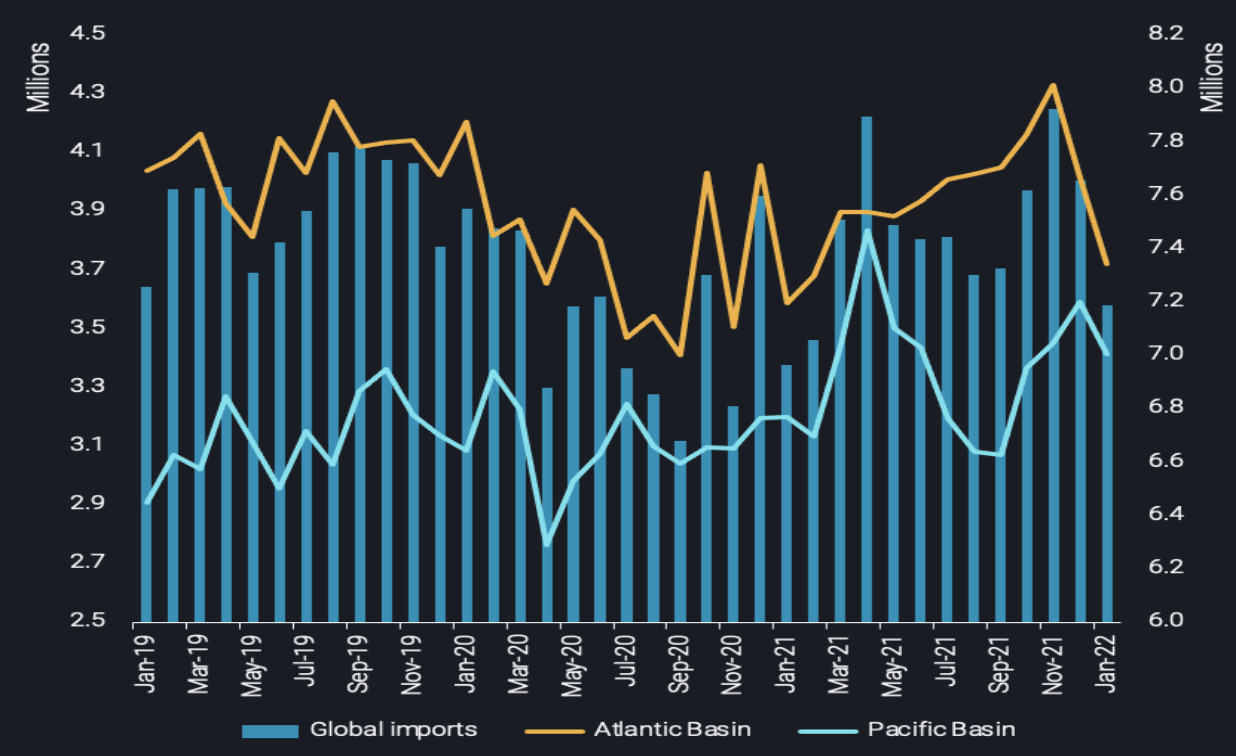 Following the clampdown of the Chinese government on refined products exports, the East of Suez market has had to look further afield to meet its demand. Indian refiners have stepped in to fill the gap left by Chinese volumes, with tonne-miles for diesel/gasoil cargoes from India to the East of Suez increasing close to two-fold from approximately 2.9bn tonne-miles in September to 6.9bn tonnes miles in December, easing slightly to 6.4bn tonne-miles as of last month.

This phenomenon has contributed to the strength in MR and LR2 earnings in the Pacific Basin throughout Q4 2021. The diverted volumes to the regional Asian market also help explain the weakness in Atlantic Basin clean tanker markets in the same period. Diesel/gasoil cargo tonne-miles to the West of Suez from India were down close to 50% from October to December, hovering still approximately 35% lower from their October levels in January. 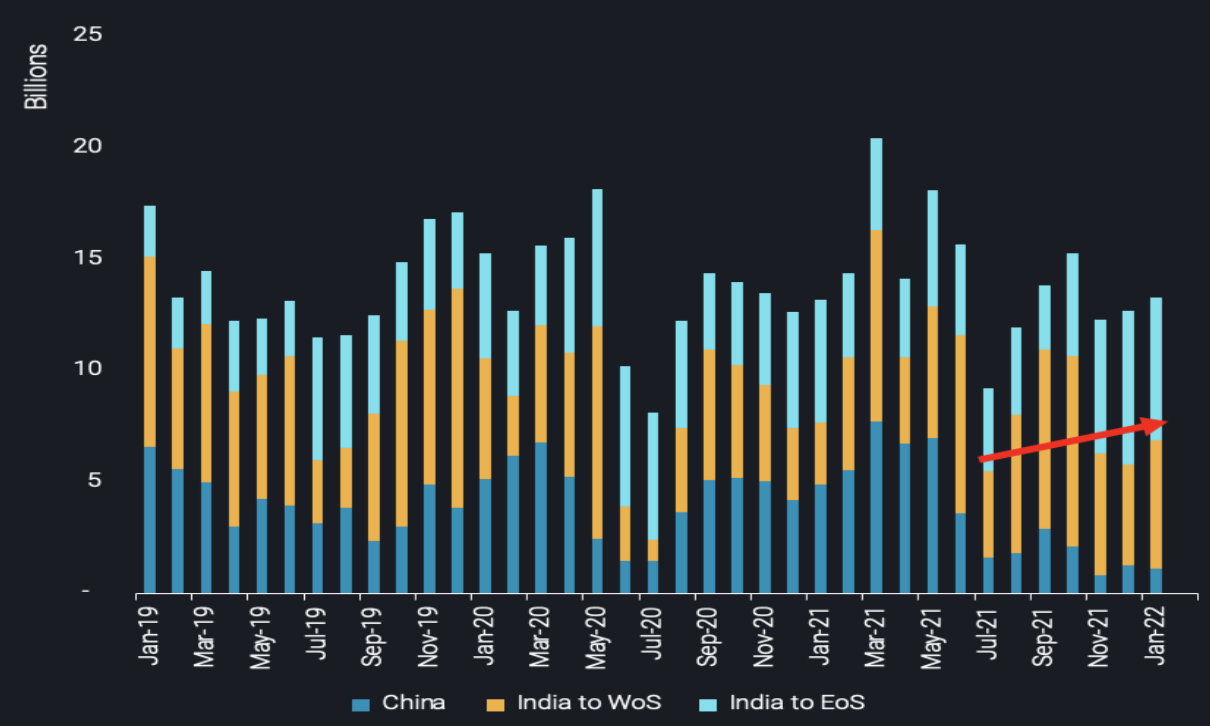 Looking ahead, diesel tightness to remain a drag on clean tanker markets

Diesel barrels to the US will be reaching a record-high in February according to preliminary data with barrels even being pulled from as far as the Middle East, on top of a record influx of Russian cargoes. Combined with gasoline inventories on the US East Coast in dire need of replenishment ahead of the summer driving season, MRs could benefit from increased employment opportunities.

However, it is more likely than not that the diesel tightness is set to continue, unless Chinese diesel exports were to suddenly pick up, adding cargoes to the market and redirecting Indian volumes westwards. This will further fuel a rise in prices, but no major hub is likely to come up with significant extra volumes. Many barrels may be withheld for local markets, continuing to challenge long-haul voyages for clean tankers, specifically LRs. The fundamental reasons behind record diesel prices are starting to look like more of a curse than a blessing for clean tanker markets. 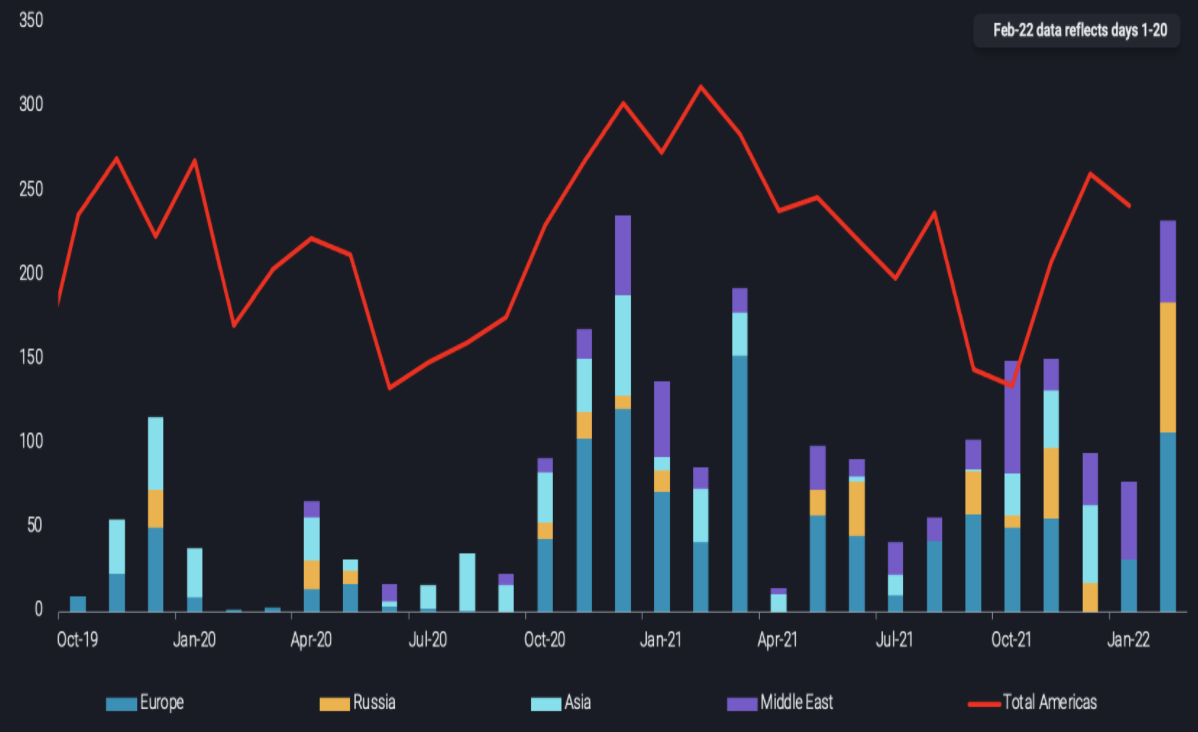 Diesel/gasoil arrivals into the US Atlantic Coast