In a way, China’s drastic cutback in diesel/gasoil exports since June has come at a perfect time in regulating regional supplies. With state-owned refiners running out of product export quotas and light cycle oil (LCO) imports drying up after the consumption tax levy in June, the country’s diesel/gasoil exports fell for the third consecutive month to 310,000 b/d last month, almost half the volumes seen in April. Exports are projected to fall even further in July, down to 170,000 b/d, setting a year-to-date low record.

But an uptick in South Korea’s diesel/gasoil exports this month is partially offsetting lower volumes from China. Exports are estimated to be up nearly 20% month-on-month to 480,000 b/d in July, a likely result of more LCO converted or blended into gasoil as demand for the intermediate blend component from China fades. In fact, exports to Singapore have surged three-fold to over 100,000 b/d in July, with several low sulphur marine cargoes headed for bunker demand. 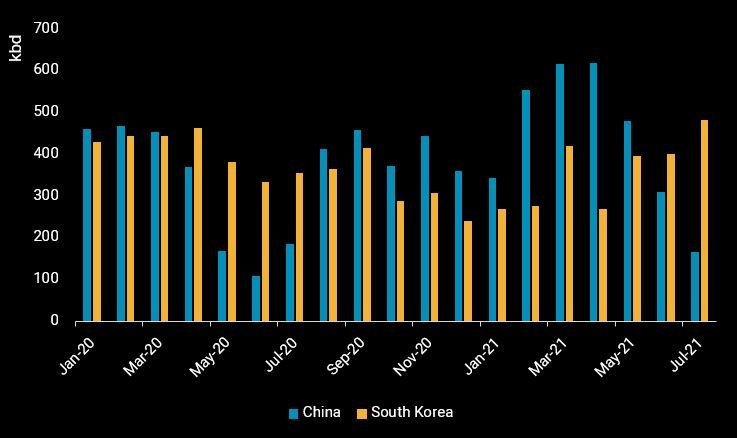 Meanwhile, diesel/gasoil imports into Australia and Southeast Asia have remained robust in recent months despite the raging pandemic. Combined imports into the region, excluding storage hubs Singapore and Malaysia, are estimated at 210,000 b/d in July, holding stable compared to previous months. Stronger imports from the Philippines and Vietnam have compensated for weaker demand from other parts of the region. Imports into Australia estimated at 390,000 b/d in July are on-track to reach the second highest monthly total for this year, as mining activities prop up demand. 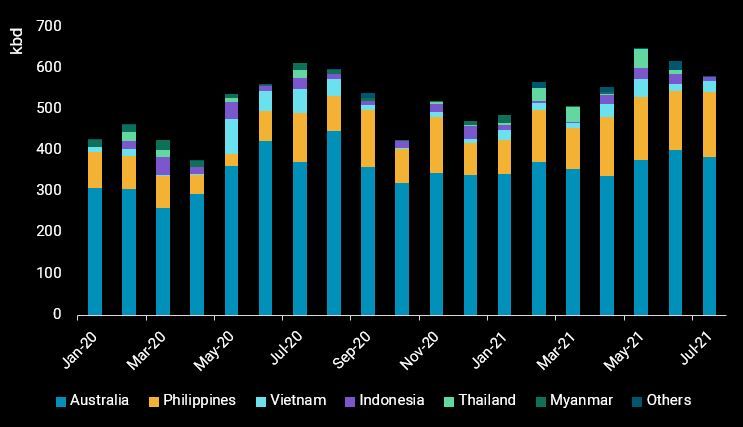