Latam imports of gasoline & diesel are enjoying a demand surge with volumes arriving from as far away as the East of Suez to fulfill hefty import requirements. Despite higher volumes of clean products headed towards Latam over July, MR tanker US Gulf – Latam remained relatively unchanged, as a fair chunk of the inflow was supplied from West Africa.

Latam imports of gasoline & diesel are on track to hit a multi-year high of 1.93 mn b/d in July.  We see the growing appetite in Latam for road transportation fuels as a demand-driven pull, with gasoline and diesel volumes arriving from as far away as the Middle East and India to fulfill hefty import requirements. 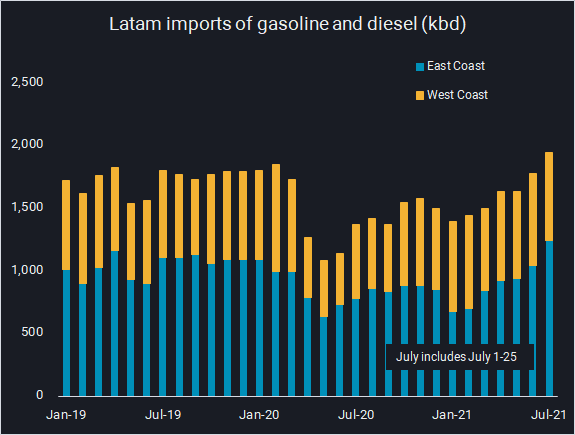 Demand is back in the driving seat

A combination of post-COVID demand and low refinery utilisation rates has pushed Mexico to top importer, taking in over 30% of diesel and gasoline exports from the United States since January, with levels swinging from 400,000 b/d in February to 650,000 b/d in June. However, the demand story does not stop there as Brazil, Chile, Ecuador, Peru, Argentina, Colombia all posted import increases to the extent of reaching a combined data set high for July in the Vortexa platform.

Although the Atlantic Basin is by far the largest exporter of road transportation fuels to Latam, PADD 3 suffered unforeseen outages at the beginning of the year which gave a window of opportunity to Asia suppliers to export into Latam.

Gasoline and diesel exports from East of Suez to Latam surged in March going from 30,000 b/d in February to a peak of 150,000 b/d in April. These volumes were supported by increased volumes of STS operations off the coast of West Africa where VLCCs transfer gasoline and diesel to smaller vessels heading towards Latam. The majority of these cargoes are destined to Brazil while the remainder are heading to Argentina, with peak consumption levels in the agricultural industry playing a crucial role. 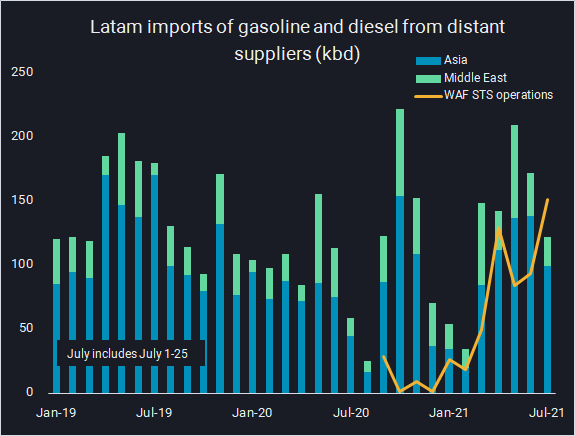 Despite higher volumes of clean products headed towards Latam over July, MR tanker US Gulf – Latam remained relatively unchanged, as a fair chunk of the inflow was supplied from West Africa. At the same time, the increasing MR tanker availability in the US Gulf region suppressed any upside potential for US Gulf – Latam freight rates. 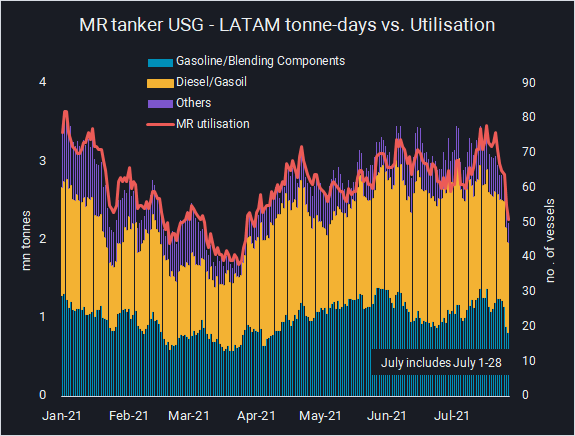 As US refineries take back market share, we would expect to see Asia flows squeezed out and these long haul volumes dry up. And as regional demand in Asia returns, the likelihood is that gasoline and diesel will remain in the region thus attracting MR tankers from West to East of Suez. As a result, this will alleviate the MR tonnage supply from the US Gulf region, possibly triggering higher trans-American rates.