What would a reshuffle in flows mean for tanker demand?
Share

In the face of mounting challenges to trade oil from Russia, Vortexa conducts a scenario analysis to evaluate how a change in the flow landscape could impact Crude & CPP tanker demand.

In the face of mounting challenges to trade oil from Russia, Vortexa conducts a scenario analysis to evaluate how a change in the flow landscape could impact Crude & CPP tanker demand.

In a previous insight we said that both Russia and Europe were largely on the same page when it came to the continuation of energy flows, even though for the latter this is not a fully unified view.

In recent days large shipowners like Torm and Maersk tankers have said they will not call at Russian ports. If other shipowners follow suit, a two-tier market could be created. On one hand, some shipping companies will be concerned about reputation, especially if they are traded in the public market and have strict governance policies. On the other hand, many shipping companies, privately-owned and independent in most cases, would want to take the risk related to Russia, enjoying elevated freight rates, at least as long as no official sanctions on energy trade are broken.

Thus, even without sanctions in place, deliberate decisions taken – by both shipowners and  charterers alike – could lead to a replacement of trade lanes for Russia-to-Europe flows. The prospect of this considerable shift in trading patterns has motivated us to examine what the impact on tanker demand could be.

The Baltic and Black Sea ports provide the European market with around 1.6 mbd of crude (or 7.8 mn tonnes on monthly basis) of Urals. According to our data, 82% stems from the Baltic, while the rest is sourced from the Black Sea.

Taking into consideration that some European buyers will resume purchasing Russian barrels, we assume a scenario where 1mbd of Russian crude will be diverted from the European market to Asia.

This new trading pattern would be beneficial for VLCCs and Suezmaxes at the expense of Aframaxes. However, the question remains as to how Europe will replace these lost Russian barrels. Most suitable candidates, as mentioned yesterday, are located in the Atlantic Basin – i.e. the US, West Africa and North Sea. For this exercise, we assume redirections to Europe (by origin region) as follows:

During the past 12 months, flows from these three regions to Europe were carried predominately by Aframax (51%) and Suezmax (44%) tankers. Hence such a development is poised to boost the demand for the aforementioned vessel classes. Conversely, these barrels’ redirection towards Europe automatically means that they will not find a home in Asia.

Below is a summary of the demand effects for each vessel class: 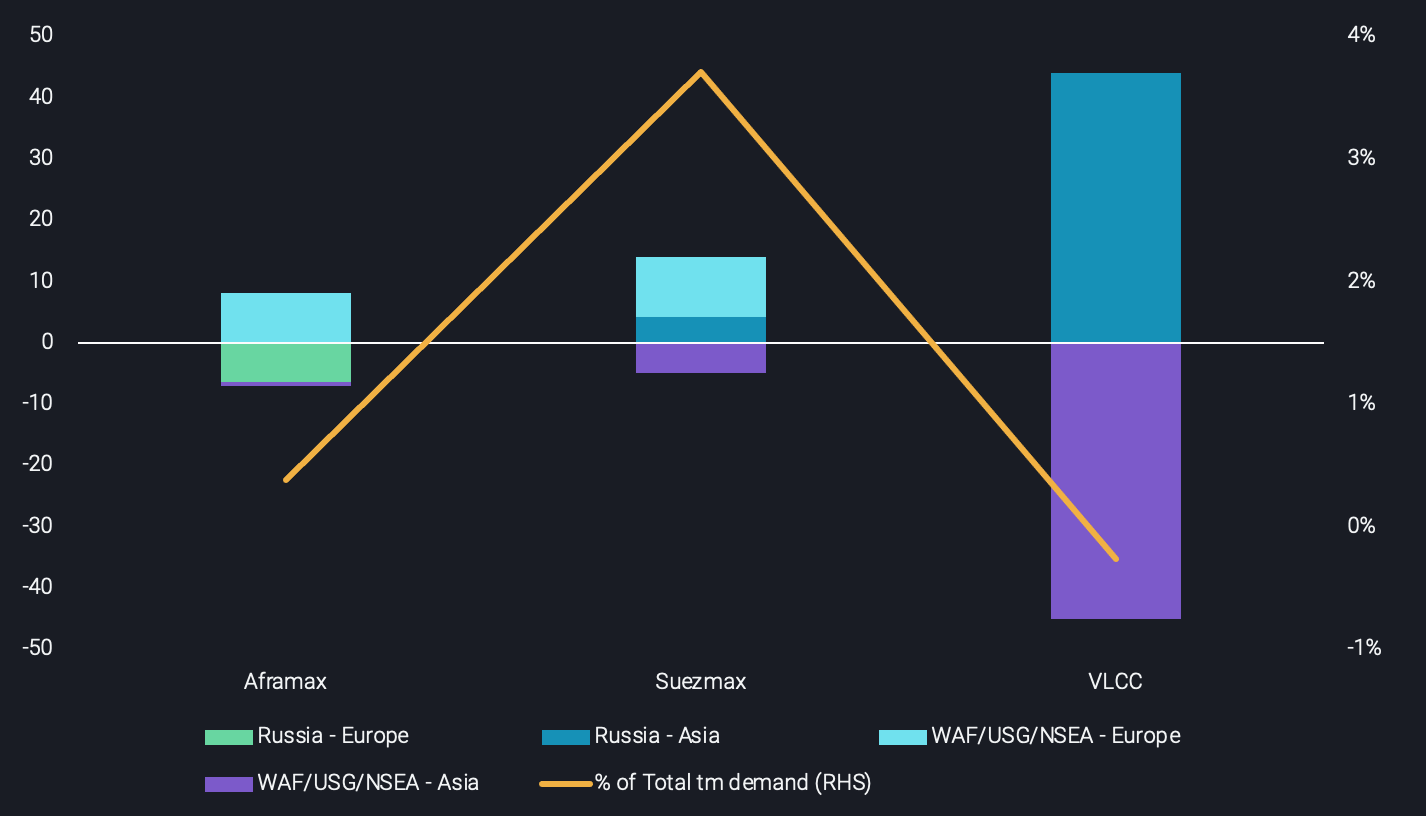 With European buyers shying away from Urals, we examine the pros and cons of some key grades that could see/are seeing a boost in demand in the coming weeks or months.

The graph illustrates that a considerable shift in trading patterns does not contribute much to overall crude tanker tonne-mile demand. For VLCCs, although the long-haul Russia-to-East Asia trade does boost demand, the lost Asian-bound cargoes from the US Gulf Coast and North Sea negate this effect. Meanwhile Aframaxes – which were expected to be negatively impacted from lower Baltic-to-UKC and Black Sea-to-Mediterranean flows – actually slightly benefit from the change in flows. Across the largest three classes Suezmaxes owners are the biggest winners as the above mentioned changes to the trading landscape would add around 4% to tonne-mile demand.

The greatest reliance when it comes to the oil trade between Russia and Europe lies within the diesel market. Europe imports around 70% of its needs from Russia which amounts to 800 kbd (around 3 mn tonnes on a monthly basis). This is also approximately the amount of diesel that the US Gulf provides to Latin America. In the instance where Russia-to-Europe flows stop, an exchange between supplies and buyers would have to be a major part of the solution to the problem. MR owners and operators would benefit from this as the short haul route of Baltic-to-UKC would be replaced by the considerably longer Baltic-to-Latam route, adding to demand.

Such a scenario could also initiate triangulation opportunities for shipowners across the Atlantic; loading in Russia, discharging in Brazil and then ballasting to USG before heading back to Europe. This will limit the ballast legs, raising further the employability and hence the profitability for shipowners.

Another scenario would be for both Russia and Europe to seek a solution in the eastern hemisphere. Currently the diesel market in Asia is also tight. However, a surge in the East-West diesel spread could trigger higher volumes from the Middle East and India towards Europe.

In return, Russia would have to satisfy the demand of the Southeast Asia and East Asia markets. This development will undoubtedly boost overall tonne-mile demand but there will be winners and losers. Long-haul routes are expected to prevail in this scenario, with the MR demand from Baltic – UKC evaporating at the expense of LR1 (MEG/India-to-Europe) and LR2 (Russia-to-Southeast Asia/Far East) tankers

The graph below displays the effects that both scenarios could have on the clean tanker fleet: 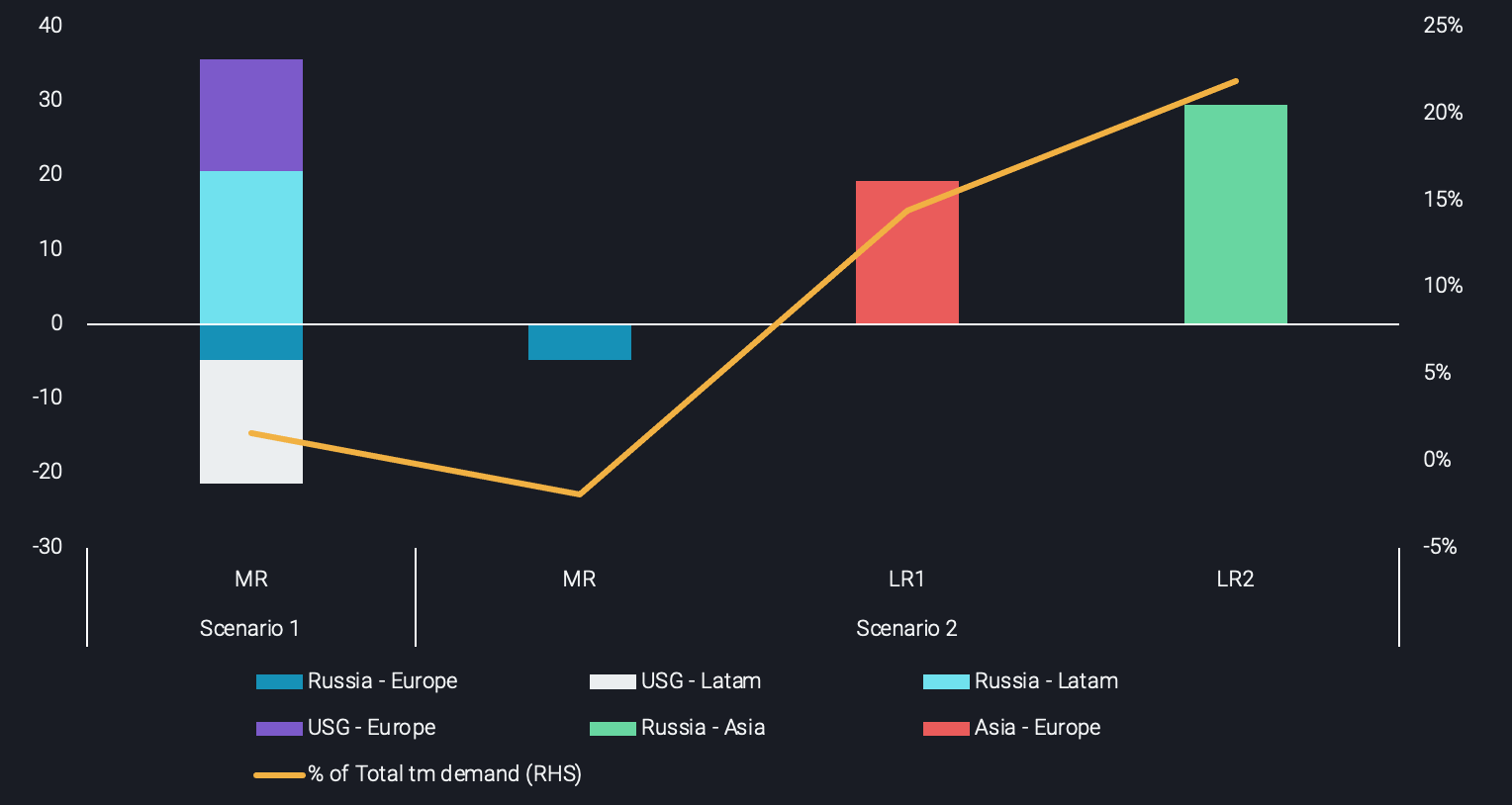 As displayed by the graph above, a reshuffling in flows on the Atlantic coasts (Scenario 1) is positive on MR tankers. However, it is only a marginal addition in percentage basis when compared to the overall MR demand.

In Scenario 2 we have clear winners and only a very minor loser. While the Baltic-to-UKC route is a fraction of the total MR demand, two long-distance routes could emerge, considerably boosting the demand of LR1 and LR2 tankers. These two vessel classes are traditionally a smaller fleet compared to their counterparts, reflecting the current status quo of the trading patterns. However, if Scenario 2 becomes the norm, this could drive a paradigm shift for the shipping parceling requirements.

It should be stressed that at least for now neither scenario is taking shape. The fact is that both Russia and Europe are codependent when it comes to diesel. European restrictions on Russian diesel would incur booming freight rates for traders as well as increasing costs for Asian, US and European buyers. In essence, the only winner in such a turnout of events is only the shipping community.