From an oil and shipping point of view, the Russia/Ukraine war may curtail or merely rerout the flows of Russian oil barrels, or even keep them largely unchanged. The importance of diesel may even top crude, with limited alternatives speaking for continued Russian-European trade.

The world changed drastically on Thursday, 24 February 2022. And the situation remains volatile, rendering it very difficult to make any strong calls on the path going forward. From an oil and shipping point of view, the question is whether supplies of Russian barrels will be curtailed, merely rerouted or simply continue as in the past.

It is interesting to note that in spite of all the dramatic action and reaction, including harsh sanctions and weapon deliveries from the European Union to Ukraine, an open threat with World War III and the nuclear option from the Russian side, both parties appear to be well-aligned that energy exports shall continue. This even appears to be the last band that is tying Europe and Russia together, at least for now. However, some cracks are appearing on the European side, with the UK banning Russian ships (not cargoes) from entering domestic ports and shipping company Torm abstaining from new business involving Russian port calls and Russian accounts.

In our base case, we would not expect Russian supplies to be curtailed meaningfully. But without any question potential buyers are struggling to arrange fresh deals, as illustrated by a Urals differential to North Sea Dated of -$15/b (Argus Media). The question is whether this reflects temporary delays due to all kinds of new challenges on the financial and logistical side of the business, or whether a significant amount of supposedly European buyers will simply stay away from buying Russian oil.

The answer to this question will depend on how difficult it is to forgo imports of Russian oil, and this is different across the barrel. In a market as tight as the current one, nobody would like to lose any barrel, but European players may well be able to cope somehow without Russian naphtha and secondary feedstocks (fuel oil and VGO).

What is at stake for crude oil?

As for crude oil, a loss of exports would definitely be challenging, with the degree depending on whether only Baltic and/or Black Sea seaborne exports are affected (about 1.6mbd), or whether CPC Blend exports via Novorossiysk (1.4mbd), Druzbha pipeline exports (0.8mbd) or even exports towards the Arctic (0.6mbd) or Asia (2.6mbd) are impacted.

The story is however different if it was only about the rerouting of Europe-facing seaborne supplies to other markets. We will explore tomorrow how it could be feasible to replace at least some of the 1.6mbd of Baltic and Black Sea exports with volumes from the wider European, US, Middle East and West African market. If such volumes would go to Europe instead of Asia, the overall upside for the shipping market could be range-bound.

The strong increase in global VLCC rates (e.g. +70% w-o-w for the benchmark TD3C MEG-to-China route) suggests market participants are betting on higher crude flows down the line. Apart from VLCCs carrying Urals to Asia, other hopes may include higher supplies from core OPEC+ countries, a lifting of sanctions on Iran, and a SPR release as just announced. However, given the largely sidewards movement of OPEC+ exports over the last four months, it is all but certain that supplies will rise strongly, given limited spare capacity and protracted negotiations with Iran. 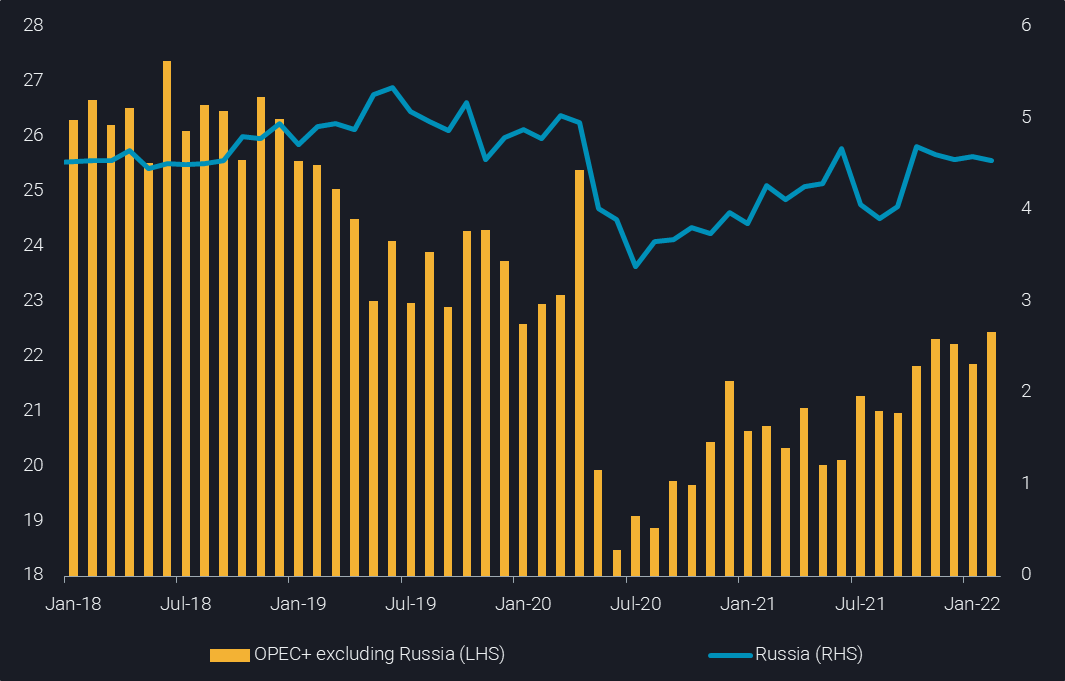 The component most difficult to balance is likely to be diesel. Last year, Russian diesel exports averaged 900kbd, with about 800kbd going to Europe. Losing those barrels is certain to be dramatic, as it would require a sharp increase in global refining operations. That however is barely feasible, even if it came separately from a stop to crude, secondary feedstock and naphtha exports.

In the case of diesel the rerouting of supplies would be massive. Around 70% of European diesel imports came recently from Russia, up from less than half in 2019 (see chart). Supplies from the US have been curtailed by strong import demand into Latin America, recent refinery outages and peak winter demand. And East of Suez barrels largely stayed in the region, after China essentially stopped producing and exporting surplus products. Middle Eastern refining maintenance adds further to the picture to recent tightness East of Suez. 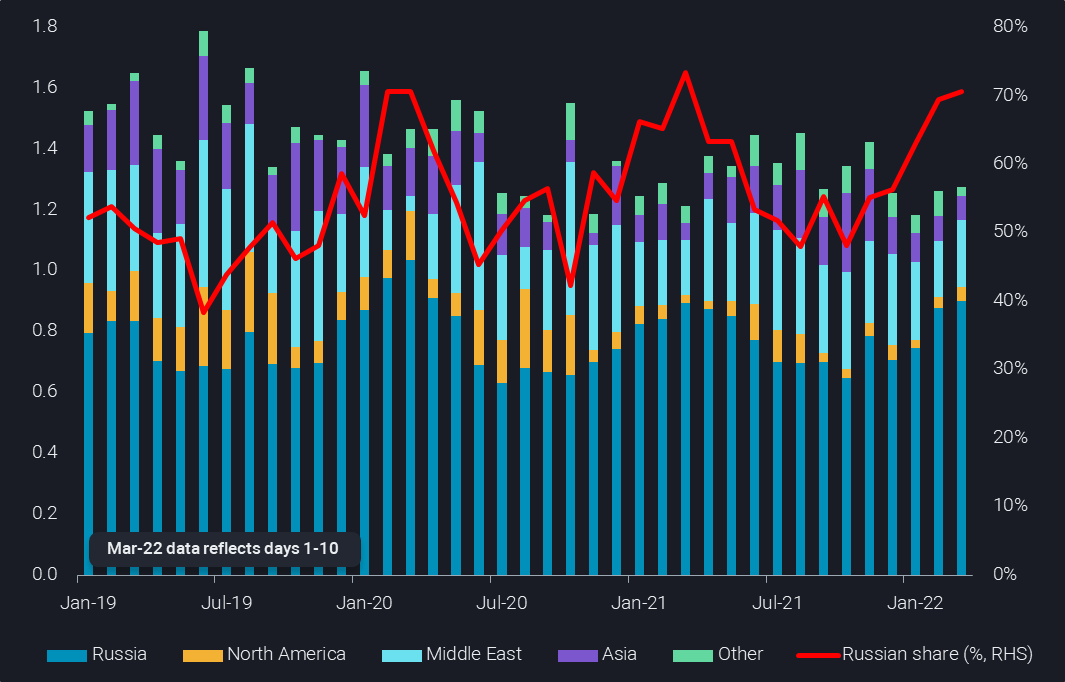 If European players would stop importing Russian diesel, it would have to resort to long-haul imports from the US, the Middle East, India and other Asian countries. In exchange, Russian barrels would have to travel all the way to Latin America and East of Suez markets. The result: a huge logistical challenge, turbo-charged clean freight rates, added costs on the consumer side and limited strains (if any) on Russia.

But if European players were to continue importing Russian diesel, why should they stop buying other Russian barrels? After all, it may well be that most of the Russian supplies continue do find homes in a smaller number of European countries. The limited interest in alternative crude grades such as BTC Blend suggests that the primary option for many European refiners may still be to get hold of Russian crude.

One way to facilitate continued European imports in a more politically palatable way could be to introduce (minor) import tariffs on Russian oil and gas. Usually the costs of such add-on costs are carried by the supplier. Other countries may follow and impose such tariffs, and even buyers that do not may nevertheless only be willing to buy at the price minus duties. Such an approach could also be acceptable for the Russian side if it comes with demand security.